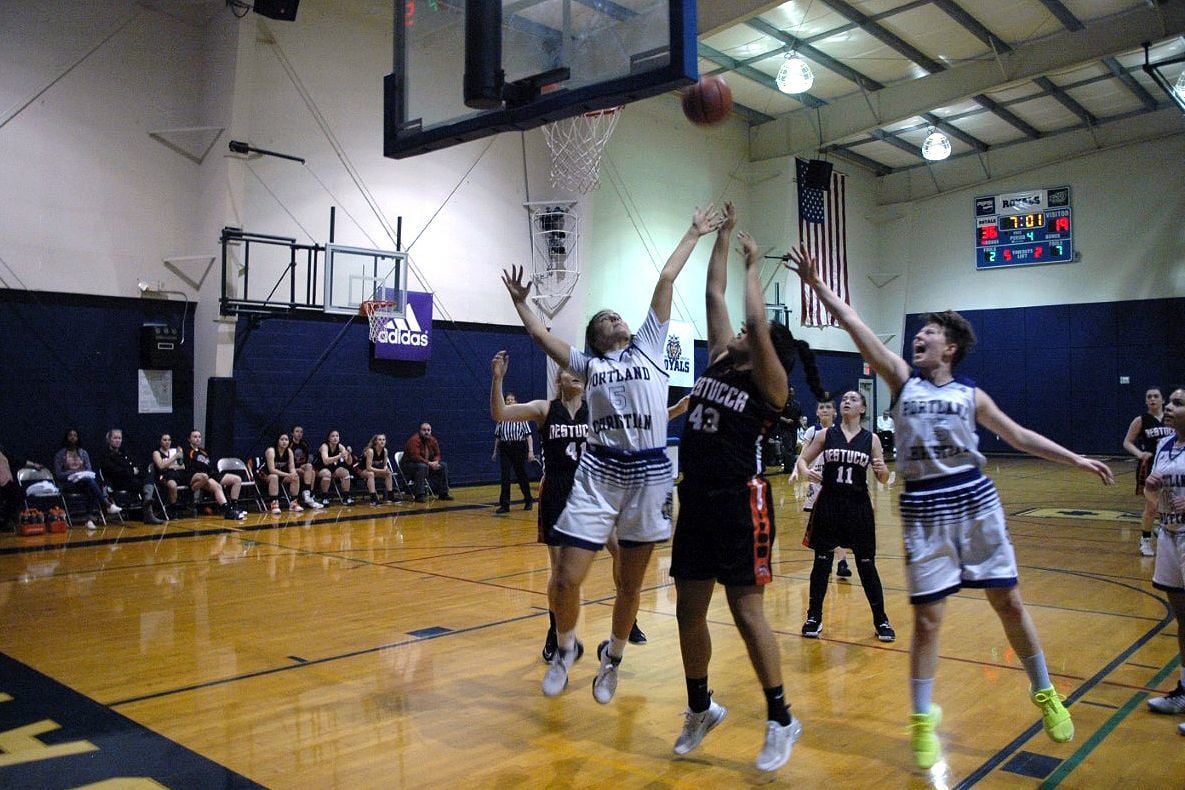 Senior Jocelyn Moreno (#43) shoots a jumper against PC on Thursday. 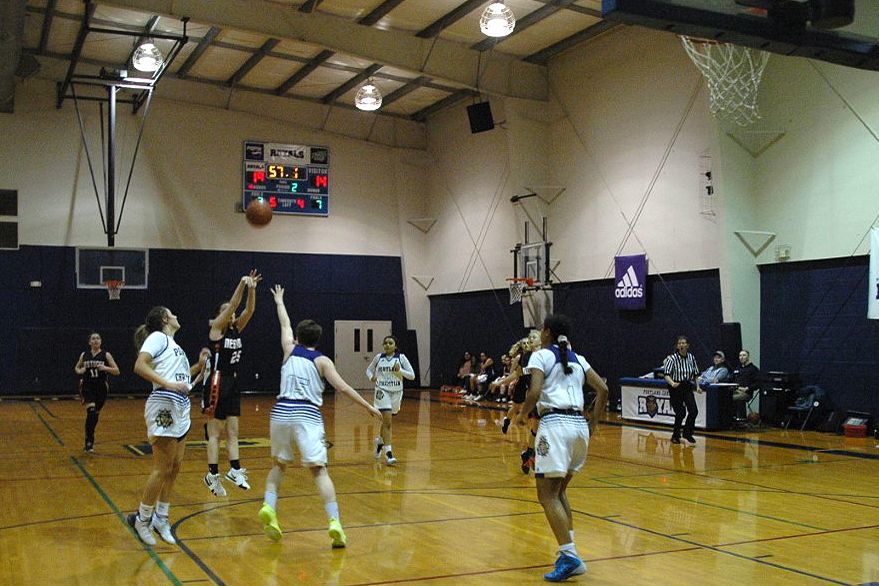 Senior guard Olivia Leslie (#25) shoots an outside jumper against PC.

Senior Jocelyn Moreno (#43) shoots a jumper against PC on Thursday.

Senior guard Olivia Leslie (#25) shoots an outside jumper against PC.

The Nestucca High Bobcats girls basketball team recorded it’s fifth win in the the last eight games with a 39-26 victory over the Neah-Kah-Nie Pirates (5-10 NWL, 6-15 overall) in a Northwest League contest Monday at Nestucca High School. With the victory, Nestucca (7-7 NWL, 9-12 overall) moved into fourth place in the league standings and clinched a spot in the district playoffs. ​

Nestucca’s defense held Neah-Kah-Nie to single digit scoring in the first three quarters. Nestucca, guided by coach Tim Foster, led 6-3 after a low scoring first quarter and then outscored the Neah-Kah-Nie 9-6 in the second quarter to take a 15-9 halftime advantage. Nestucca outscored Neah-Kah-Nie 12-5 in the third to build a double-digit 27-14 lead after three. The junior duo of Kiarra Webber and Shamilee Chatelain both scored nine points each for Nestucca. Junior Kyla Huntley led Neah-Kah-Nie in scoring with seven. ​

“We struggled to make shots in the first half, but we stayed aggressive and we were able to build a lead in the second half,” said Foster. “Lauryn Dunn played great defense and she knocked down a couple of big shots too.” ​

In a Feb. 4 home contest against the Northwest League leading Vernonia Loggers, the Bobcats had a shot at capturing a fourth straight win. Nestucca played tough and had a chance but just fell short in a 52-45 loss to the No. 13 ranked Loggers (13-1 NWL, 17-5). ​

Nestucca, guided by coach Tim Foster, started slow and trailed 17-5 after the first quarter. The Bobcats responded by outscoring the Loggers 15-10 in the second quarter, trimming the margin to 27-20 at halftime. Nestucca took a lead in the third and then trailed 35-33 at the end of the quarter. Senior guard Olivia Leslie scored 10 of her game-high 21 points in the fourth to help keep it close until the end of the contest. ​

“Vernonia plays a physical style of basketball and I thought we matched that for most of the game,” said Foster. “We came out and played with good intensity in the third quarter to get a lead. Vernonia clamped down defensively and we let them get to the foul line too many times to keep control of the game. Our effort was great and we had Vernonia where we wanted them, but we just couldn’t close it out. It was a good game on both sides and again we showed we can play with highly ranked teams in the 2A level.” ​

Despite that loss, the Bobcats were hoping that their recent success - four wins in their last six games, would continue when they faced the Portland Christian Royals Feb. 6. The Bobcats were unable to maintain the momentum that they had established in the previous six games as they suffered a 43-26 loss to the Royals last Thursday at Portland Christian High School. ​

The Bobcats had a great start in the matchup against the No. 6 ranked Royals (12-2 NWL, 20-3). Nestucca took the initial lead when senior guard Olivia Leslie (10 points) sank a 10-foot baseline jumper giving the Bobcats a 2-0 advantage with 4:43 remaining in the first quarter. Portland Christian then scored five straight to take a 5-2 lead and the two squads traded baskets as the Royals led 7-4. Leslie then fired in a three-pointer from the corner for a 7-7 deadlock at the end of the quarter. ​

The contest included a total of five lead changes and Leslie’s jumper from the free throw line put Nestucca in front for the final time at 12-11 midway through the second quarter. PC regained the advantage with a 5-0 run to build a 16-12 lead and they never trailed again. The teams traded baskets for most of the quarter and Portland Christian led 21-17 at halftime.​

The Royals then took control of the contest in the third quarter. The Bobcats were unable to get into an any offensive rhythm as their shots wouldn’t drop and they committed a number of costly turnovers that helped enable Portland Christian to extend its lead. ​

The Royals had an offensive burst as they outscored the Bobcats 15-2 in the third quarter to take a 36-19 lead after three. Webber (four pts.) scored the only Bobcat basket in the quarter. The teams then traded baskets throughout the fourth quarter with both squads getting seven points for the final margin. ​

“We played well for three quarters, but the third quarter really did us in,” said Foster. “We had a cluster of turnovers in the quarter and PC hit two three’s and a couple of other shots to turn a two-point game into a 15-point game pretty quick. We took away their main scorers in the first half, but they got free and made the most of their attempts in the second half.” ​

Nestucca’s 26 points marked its lowest total score for any game this year and the 17-point final margin was the largest of any NWL game this season. ​

“The girls continued to battle, but we couldn’t get our shooting going to overcome the deficit,” said Foster. “A lot of games come down to turnovers and shot making and unfortunately, we had a spell where we turned it over and PC made shots. With good teams, it’s hard to overcome that. We rushed things and PC got their hands on a lot of our passes. That combined with us missing shots and them making theirs was the difference.” ​

Nestucca’s success this year has paid off as the Bobcats have now clinched an OSAA Class 2A NWL District playoff berth for a second straight year. Prior to districts though, Nestucca has two games remaining on its 16-game regular season schedule. Nestucca, which is now in fourth place, meets the Knappa Loggers (6-9 NWL, 10-13) in 6 p.m. contest today at Knappa High School, followed by a 6 p.m. Valentines Day regular season finale at home versus the Faith Bible Falcons (11-3 NWL, 19-4). Nestucca will face a yet-to-be determined opponent in the district playoffs Feb. 18.​

Are our local leaders doing everything in their power to ensure our community stays as safe as possible during this COVID-19 virus pandemic?

Are our local leaders doing everything in their power to ensure our community stays as safe as possible during this COVID-19 virus pandemic?