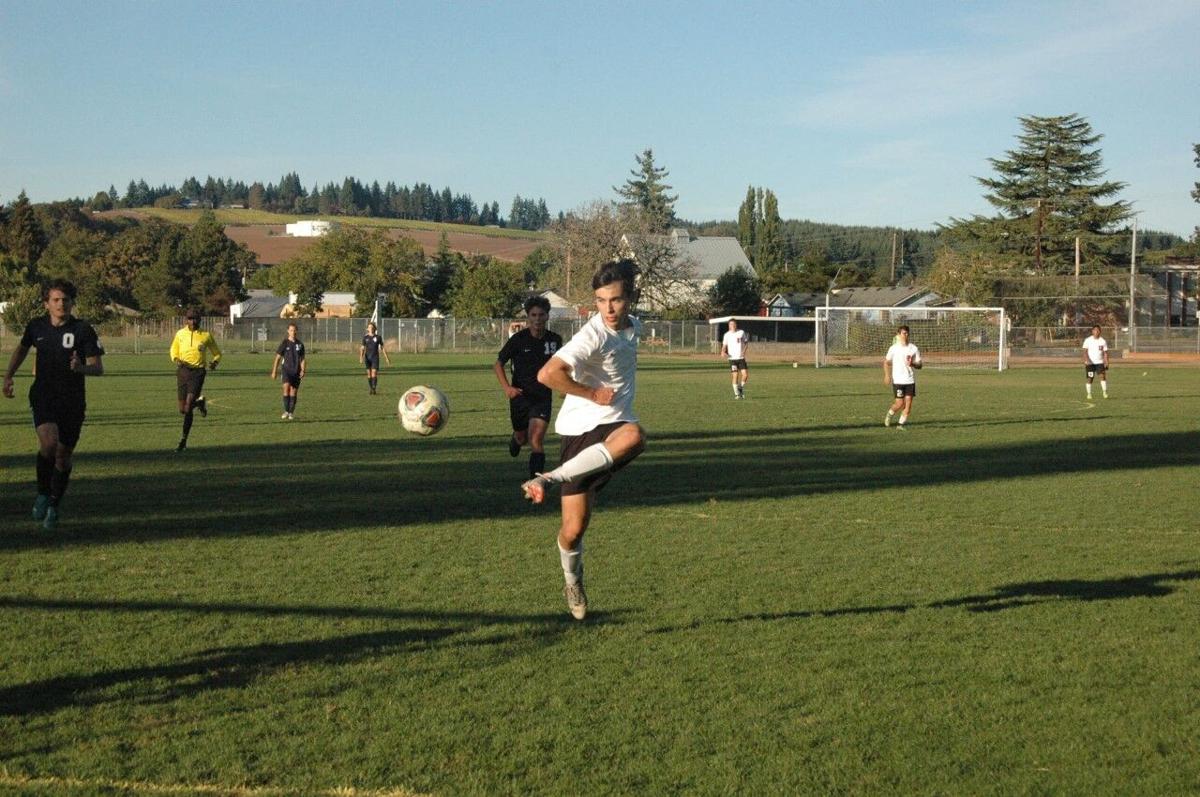 Affolter scores a goal with this kick. 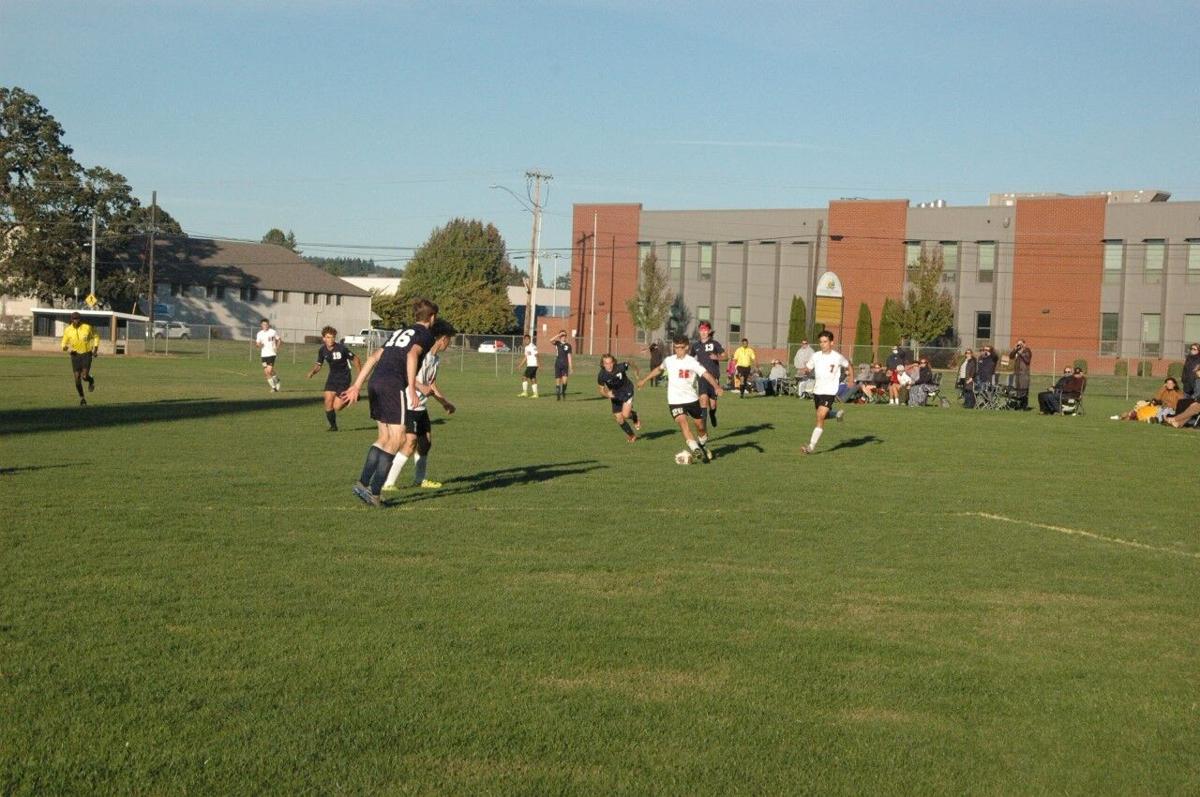 Bruno Monroy dribbles the ball while leading the offense. 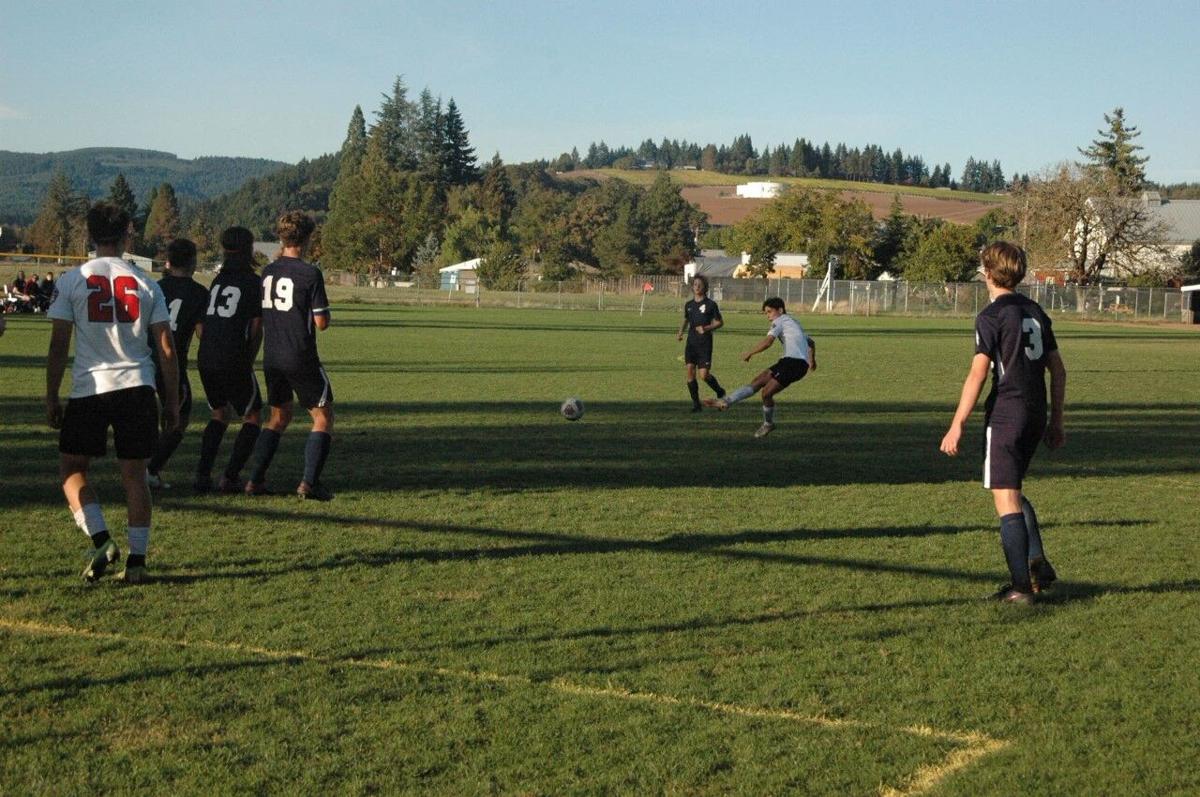 Carter Affolter fires a free kick in the second half versus Banks.

Affolter scores a goal with this kick.

Bruno Monroy dribbles the ball while leading the offense.

Carter Affolter fires a free kick in the second half versus Banks.

The Tillamook High Cheesemakers boys soccer team snapped a two-game losing streak and moved up to second place in the Class 4A Cowapa League standings following a 2-0 win over the Banks Braves Oct. 7 at Banks High School.

On Oct. 5, Tillamook played well and dominated the time of possession while outplaying the Seaside Seagulls (2-2 league, 3-4-1 overall), but lost a close game 1-0 at Seaside High School. The No. 15 ranked Cheesemakers (2-2 league, 4-3-1 overall), guided by co-head coach's Brian Reynolds and Jose Lara, responded well though after that loss and regained their momentum with the big confidence building win over Banks (1-2-1 league, 1-6-2 overall).

"This time, the difference is, we were able to find the back of the net," said Reynolds. "We had a couple of really nice balls played early in the game and then their was a nice shot off of a volley by Bruno Monroy for our first goal. We'll take a win any way we can get one. We're excited about it and it give's us something to move forward with. We've had momentum all season, but we've had a couple of tough breaks. We've been competing hard and we're proud of these boys, because they've been practicing hard and they played well to get a win and this helps provide us with some confidence. This is just the first step and we have a long ways to go."

The Mooks will be seeking to get their second straight win when they meet the Astoria Fishermen (0-3-1 league, 0-8-1 overall) in their next game at home Wednesday, Oct. 13, at 7:15 p.m. There's four games remaining in the regular season which concludes Oct. 26.

"This is a crazy league, anything can happen and we don't take anything for granted," said Reynolds, in his 17th year with Tillamook. "Everybody is beating everybody at this point. We'll come back and play strong no matter who the opponent is. It is a nice relief to get a win and the boys can ride home with a smile on their face."

Tillamook had several good chances to score early in the contest and then capitalized on an offensive possession to take a lead midway through the first half. Mooks senior midfielder Bruno Monroy fired in a shot from 19 yards out that sailed into the left corner of the net, putting the Mooks up 1-0 in the 20th minute.

Senior midfielder Edgar Estrada delivered a perfectly placed ball to Monroy for an assist on the goal, giving the Mooks a 1-0 lead in the 20th minute. Junior forward Carter Affolter, senior forward Alex Lopez and junior midfielder Ryan Mizee also had good first half scoring opportunities for the Mooks, who outshot the Braves 7-2.

Estrada, a senior midfielder, delivered a perfectly placed ball to Monroy for an assist on the goal. Junior forward Carter Affolter, senior forward Alex Lopez and junior midfielder Ryan Mizee also had good first half scoring opportunities for the Mooks, who outshot the Braves by a total of 7-2.

"This was a great game and I had an assist, which was actually a banger for my friend Bruno, whom I've known for about 14 years," said Estrada. "We've all played soccer together for 10 years, so we've been doing this a long time. I want to thank Coach Lara, who is doing a great job in his first year coaching our team."

In the 37th minute, Tillamook had consecutive corner kicks with Estrada booting the passes into the goal area and it was a golden opportunity to score another goal. Banks goalkeeper Kristian Arcadia was able to make the key saves to help thwart the Mooks offense. Tillamook outplayed Banks and had an advantage with shots on goal and time of possession, while building a 1-0 halftime advantage.

Tillamook had an excellent chance to score in the 55th minute. Lopez was fouled during a Mooks offensive attack and then Affolter was awarded a free kick from 18 yards. However, the Banks defenders played solid defense to prevent a Mooks score.

Just two minutes later, the speedy Affolter dribbled past a couple of Braves defenders and then booted a shot in from the left side, putting Tillamook up 2-0 in the 57th minute.

"It's good to get a win and build our momentum, especially when we know we're going to play some tougher teams later in the season," said Affolter, who leads the Mooks in scoring with 10 goals.

Mooks freshman goalkeeper Diego Barragan-Lara played strong as the starter in front of the net while he made a number of solid saves to help lead Tillamook to its fourth shutout this season. Junior goalkeeper Kobi Rico played in the second half and he also helped contribute to the shutout effort.

The Mooks back line of defenders Brock Manderson, Bryan Hernandez, Russell Cruz and Bryant Castillo had an outstanding defensive effort too while help limiting the Banks offense with their solid play in preventing the Braves from having any potential scoring opportunities.