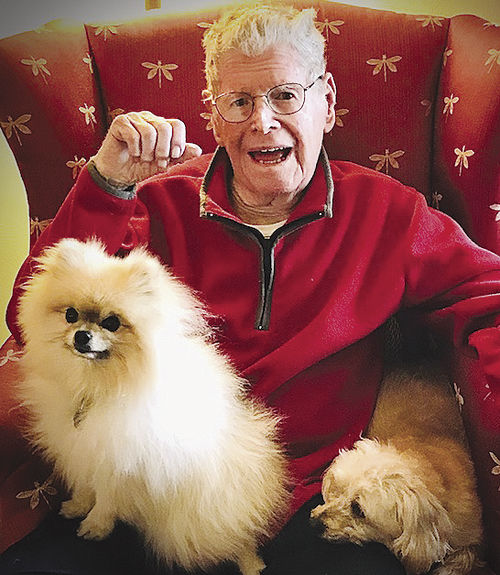 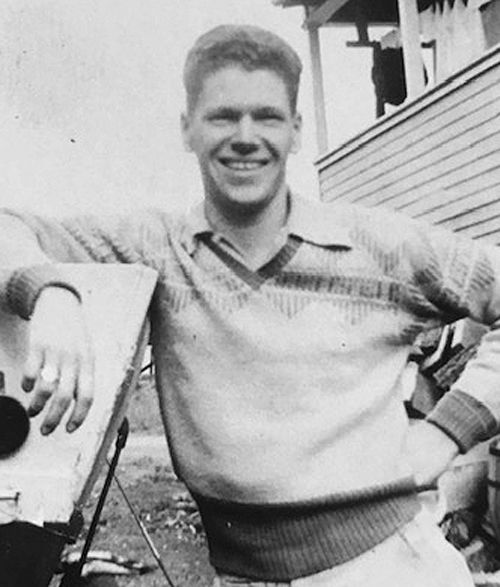 On Monday, May 18th John D. (“Jack”) Randall peacefully departed this world, two months shy of his 100th birthday. The youngest of four children, he was born to Herman and Edith Randall on July 25, 1920 at the family home in Albany, Oregon.

Jack’s (our Dad’s) earliest memory is of riding his tricycle on the sidewalk along Woodstock Boulevard at 52nd Street in Portland. Dad was two or three years old when he took baths in the kitchen sink and asked his mother to make a “rooster comb” of his hair. His sister, Eileen, played the piano and her friends gathered and sang (his favorite song was “Margie” and they sang it to him at bedtime: “Margie, I’m always thinking of you, Margie”.)

Dad’s father was a railroad engineer on the Southern Pacific line, working the 8 a.m. to 4 p.m. switch engine shift at Portland’s Brooklyn Yard. When he drove home each day, Dad ran down the street three or four blocks to meet him. He would jump onto the running board of the old Maxwell Touring Sedan and ride the last few blocks home holding onto the doorsill.

The family moved to Gladstone in 1925 because his parents wanted to grow a garden and raise the kids in the country. They bought five acres and a house, planted fruit trees and a huge vegetable garden, kept pigs and chickens and a milk cow named “Muggins.” During the Great Depression, his mother many times told him to invite this or that school mate home for dinner; she knew which families had no work and no food.

During the summers of 1937, ‘38, and ‘39 Dad worked as a “gandydancer” in a railroad section crew. The crew upgraded track, replacing ties and rails, “pick tamping” (packing ballast under the ties with a pick). This was brutally hard work.

Putting in switch points along the rails was a critically important art because the trains would hit them at 70 MPH. Putting in ballast, ties, tie plates, rails and spikes had to be done with precision to stand up against the immense weight and momentum of the speeding locomotive and its following cars that rocketed across the switch plate to change direction.

In August 1941, Dad went to work as a “fireman” on the Southern Pacific, and in February 1942 married our Mom, Bonita Faye (“Bonnie”) McEwen, at Moreland Presbyterian Church in southeast Portland. Over the years they had four children, Mike, John, Nancy and Barbara.

When Dad was twenty-one, he felt great satisfaction in learning how to run a steam locomotive. He worked with old heads, his dad’s peers, who had thrown wood on steam locomotives at the turn of the 20th Century. Air braking (“a life-long study,” Dad said), regulating steam distribution into the cylinders, accounting for variabilities in terrain, the train’s tonnage and number of cars, its speed over the roadbed--all had to be mastered. There was a considerable body of theory in all this, but the real learning was a complicated mix of books and seat-of-the-pants experience.

Dad enlisted in the US Navy during World War II in early 1944, serving on a troop transport ship, the Cape Johnson. When at battle stations he served on a gun crew, but his regular job assignment was to operate valves in the ship’s fireroom. Below decks, in the South Pacific, he worked in 135 degree temperatures, losing around thirty pounds in the process.

Dad was involved in six Pacific invasions at Saipan, Tinian, Leyte Gulf, the Philippines Campaign, Iwo Jima and Okinawa. Aboard ship during the war he traveled 99,000 nautical miles

After Iwo Jima was partially secured, Dad said that both at dawn and at dusk it was exhilarating to see the US Marines’ sparkling P-51 Mustangs come roaring in from Saipan and make strafing runs against Japanese positions on the slopes of Mt. Suribachi and other parts of the island. Landing on the airstrip to refuel afterward, the Marine pilots looked no older than high school kids.

In the Philippines invasion at Lingayen Gulf off the northwest part of Luzon, Japanese kamikazes attacked Dad’s convoy at sunset. The ships in his convoy put up a wall of anti-aircraft fire, but he said it was amazing to see how many of the Japanese planes flew right through the flack to hit or sink several ships in his convoy.

Dad was discharged in January 1946 and went back to work as a fireman on the Southern Pacific Railroad. He studied air brakes, the railroad’s book of road rules, steam and diesel locomotive technology, and other topics. Dad brought home stacks of books to study on all these topics and he was promoted to engineer in 1950.

We kids remember Mom hushing us on at least a thousand mornings: “You kids be quiet! Your Dad worked all night and he’s trying to sleep.” In dead winter, as a young, low-seniority member of the “engineer’s extra board”, he’d get a call from the dispatcher at midnight for any number of distant jobs: driving to Albany, Wheeler, Salem, Tillamook, McMinnville, Corvallis, or Newberg to pick up a freight train in the pre-dawn hours. He said the jobs always seemed to come up at 3 a.m., and he had to drive to them “75 miles away through a sleet storm.” He had no expense reimbursement but paid for his own gas, food and lodging. Jobs were paid on the basis of the weight of the locomotive(s) that an engineer ran, and the best jobs always seemed to be the farthest from home.

On any given job, he often ran the locomotive and three to five diesel power units, their air brakes and electrical systems hooked in tandem. At times in his career he pulled 125 to 130 fully loaded freight cars.

He was a strong union man, and several times was elected President of his local union chapter, The Brotherhood of Locomotive Engineers.

The Salmonberry River run over the Coast Range between Portland and Wheeler was among the hardest and most demanding, from a train-running perspective, but this also was the run he enjoyed most. The big engines slipped on the rails due to the 4 percent mountain grades, and this caused slack actions between the cars’ couplers. There were “break-in-twos” time and again. If only a coupler knuckle broke, it could be replaced right there.

Otherwise, if the whole draw-bar had broken off a car, each of the separated units’ brakes had to be set. He hauled the front section of the train ten or twenty miles to the next siding, then drove back and hooked up the separated units and hauled them up to the siding, leaving them there for a unit of car-men to come out from Portland and make repairs.

The Portland to Tillamook run paid well, had regular hours, and the scenery was great: leaving Portland in the early morning, hauling empty cars to the coast, climbing up through the deep forests and rugged peaks of the Coast Range, running down the Salmonberry River into Wheeler and along Nehalem Bay, through Rockaway and Garibaldi, then rolling into Tillamook in late afternoon. He laid over at the beach until morning, then headed back with full cars of wood chips and lumber, climbing the mountains again and rolling back down into Portland.

Dad loved the beauty: the rugged Salmonberry River, high rail trestles, deer and bear, the forests of the Coast Range--all of it. Against all rules, he would stop the train and drop off or pick up hunters and fishermen along the Salmonberry.

He had angry memories of the public’s recklessly tragic behavior at crossings. Over the decades his trains hit several passenger cars, and people were killed. Many times, kids would stop their cars on the tracks, playing chicken with his train that had no chance to stop. Then the kids would pull away at the last second before being hit, though Dad had laid on the horn, and finally “gone to Emergency.” Every diesel power unit and freight car would apply full air brakes instantly and all diesel engines would shut down.

In some heavily loaded conditions the train would need about a mile to stop.

Time was lost as each locomotive unit had an isolation switch that had to be turned off individually. Each power unit had to be restarted one at a time and put back on line. Too frequently, all of this was accomplished while several rail crossings were blocked and car traffic backed up and horns blared. It was nerve wracking and maddening.

Dad was predeceased by our loving Mom, Bonnie, and by our brother John (“JR”) and sister Barbara. He is survived by his truly wonderful second wife, Betty Rose (Lorts) Randall, his son Mike and daughter Nancy, and four grandchildren, Peter and Libby and Bryan and Emily.

Dad worked as a railroad fireman and engineer for forty years. Then he had a forty-year long retirement. He and Mom moved to Netarts in 1995. He loved the coast, clamming, crabbing, golfing with his buddies, and nailing his fourth and last “hole in one” at age ninety-one. He was an avid reader, kept himself physically and mentally fit, loved to have a beer, enjoy the companionship of family and friends, and laugh a lot. He was a generous man and always said, “I’ve been lucky all my life.”

Plans for a “celebration of life” are unclear right now, but probably will be tied to Dad’s 100th birthday on July 25. Any memorial gifts should be sent to: Adventist Health Hospice, POB 188, Tillamook, OR 97141.

The Port of Tillamook Bay board has appointed Christian Sween to fill vacant Position #3 on the board. Two applicatio… Read more

Inside Out June Dairy Parade: ‘Herd’ it was All Fun