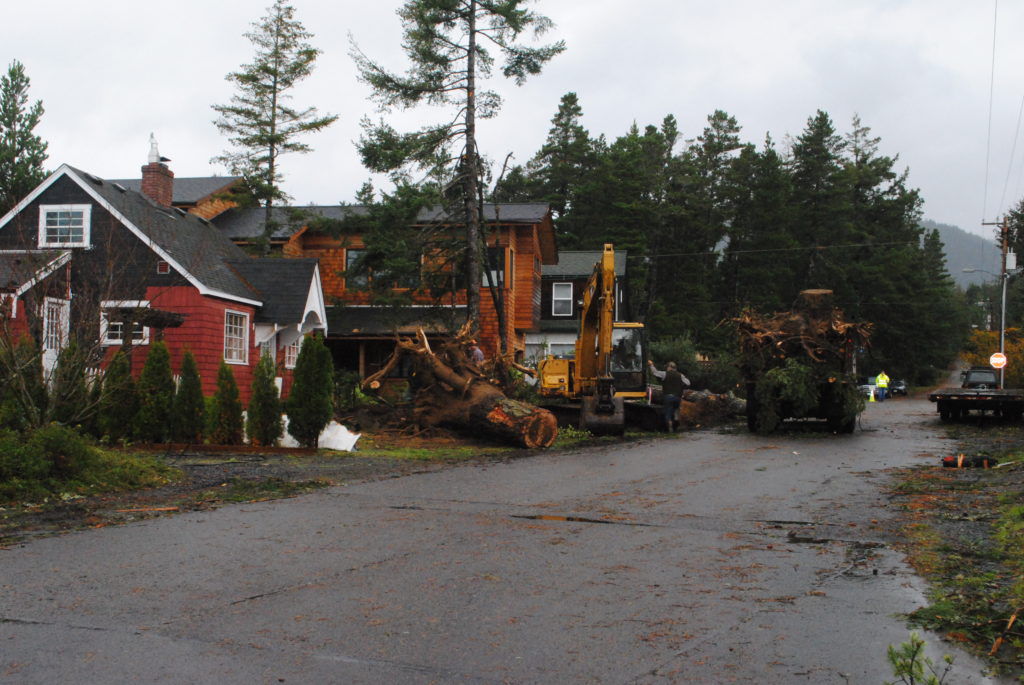 Crews clear away debris in Manzanita following Friday’s twister that left a path of destruction in its wake. 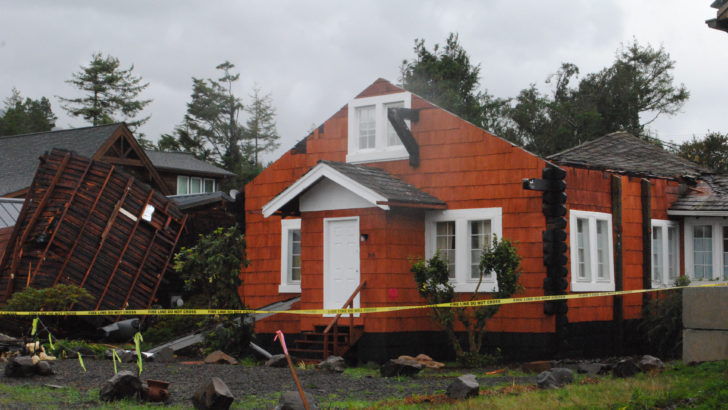 A roof was completely swept away from the tornado that zoomed through Manzanita on Oct. 14. 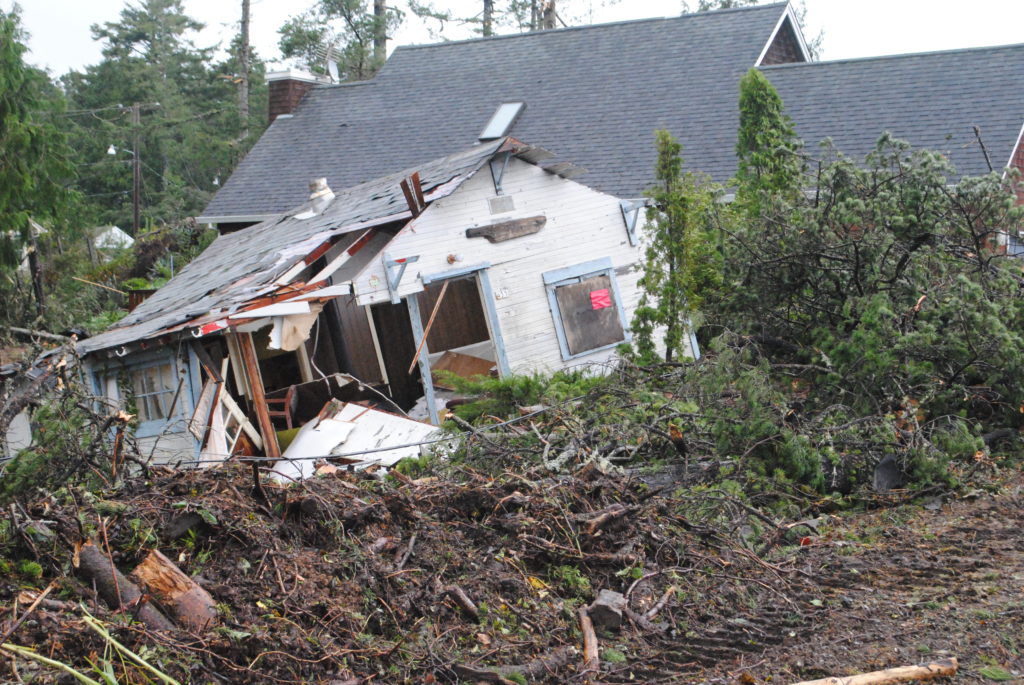 128 structures were damaged or completely destroyed in Manzanita from a tornado on Friday.

Crews clear away debris in Manzanita following Friday’s twister that left a path of destruction in its wake.

A roof was completely swept away from the tornado that zoomed through Manzanita on Oct. 14.

128 structures were damaged or completely destroyed in Manzanita from a tornado on Friday.

Manzanita residents weathered the storm, but the worst may be yet to come – as in dealing with the aftermath of the tornado that ripped through the coastal community on Oct. 14.

“Now that it’s over the clean-up begins,” Tillamook County Commissioner Mark Labhart said during a briefing the following morning at Manzanita City Hall. “And some of the issues around all that start happening and sometimes those are worse than the disasters themselves.”

Manzanita’s recent disaster came in the form of a water spout coming ashore at 8:18 a.m. last Friday, resulting in an EF2 tornado. It brought winds up to 130 mph and carved a nearly mile-long, 700-foot-wide path heading northeast toward U.S. Highway 101.

Tornados are measured on a scale from EF0 to EF5, with the latter producing strong winds that can level buildings, according to the National Weather Service (NWS).

Officials said a second water-spout-turned-tornado made landfall at 9:09 a.m. near Oceanside that same day. No damage was reported in that incident, and no injuries or deaths were reported in either situation.

“Not that anyone wants to go through a tornado but (Manzanita is) one of the most well prepared communities in Oregon and it showed,” Labhart said. “Your emergency response machine went to work immediately implementing what you have practiced and prepared for.  I think I can speak for all the elected officials… to say well done, Manzanita.”

Tillamook People’s Utility District (PUD) reported about 2,500 customers lost power Friday. By Saturday evening, all but 44 connections had been restored.

Tillamook County Emergency Management Director Gordon McCraw said the only reason those people were still in the dark was because the connection equipment at their homes had been destroyed during the tornado. A licensed electrician is needed to come out and restore service.

Emergency Volunteer Corps of Nehalem Bay Coordinator Linda Kozlowski said about 35 volunteers hit the streets directing traffic and whatever else was needed. Two emergency shelters were set and residents were bringing food to the disaster teams on the scene.

“People were Johnny-on-the-spot, prepared and ready to respond,” she said. “The volunteers are very proud to have been helping their community.”

Not only are the volunteers proud, so was State Sen. Betsy Johnson of the exemplary efforts made to protect the welfare of the coastal community within her district.

“I have held Manzanita up repeatedly to other cities as an astonishing model of emergency preparedness,” she said. “There is a culture of preparedness in Manzanita that doesn’t exist anywhere else. It’s a comfort to the citizens and may have minimized any additional damage.”

And to further help tornado victims as they face the storm’s aftermath, a list of licensed contractors used by the county can be obtained at city hall.

Residents with insurance questions can contact the State Insurance Commissioner by calling 503-378-4100, or visit the Oregon Department of Consumer and Business Services website at dcbs.info@oregon.gov.

EVCNB will be hosting one of their emergency “Go Bag” class Oct. 28 from 10 a.m. to 1:30 p.m. NBF&R Station 13, located at 36375 Hwy 101 N in Nehalem. The focus of this training will be tornado preparation. No registration is required. For questions, contact president@evcnb.org.

A fund has been set up to help Manzanita tornado victims at U.S. Bank in Manzanita. Any donation is tax deductible because the fund is set up through the Folcrum Community Resources/Manzanita Tornado Relief fund, a 501-C3 entity.

Updates with any information, clean-up efforts or community resources are available on the Manzanita Tornado Relief Facebook page. If you want to help local Tillamook County residents in need, consider donating to the Manzanita Tornado Relief Fund. Also, the Facebook page www.facebook.com/manzanitatornadorelief has been created for people who may need help and to find updates.

Many, many businesses in Manzanita are open and ready to serve the surrounding communities. Among the best ways to show support for their rebuilding process is to visit these shops and restaurants and offer them business, going in to the winter season. They would probably appreciate seeing the smiling faces.

The first tornado Timothy J. Newton had ever seen was at 8:18 a.m. in Manzanita on Friday.

What do you enjoy most about Halloween?

Halloween is just around the corner and Jack-o-Lanterns and spooky decorations are appearing! What do you enjoy most about the holiday?

Get to know the county commissioner candidates: David Yamamoto

Tell us about yourself

Get to know the county commissioner candidates: Jennifer Purcell

Tell us about yourself

A fund has been set up to help Manzanita tornado victims at U.S. Bank in Manzanita. Any dona…

A continuous celebration: 10 years of the Tillamook Forest Center

The first week of the new year is a great time to write about the positive, spontaneous and heartwarming community response to the tornado tha…

A tornado left storm damage in the Manzanita area Tuesday, Jan. 21. Large hailstones were also reported as a rainstorm struck along the North Coast.