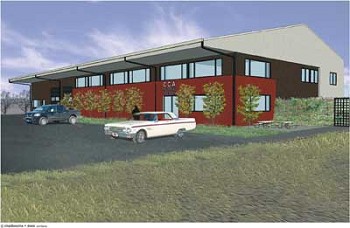 Image courtesy of Chadbourne + Doss architects
The final design for the Clatsop County Regional Food Bank is shown in this artistic rendering. 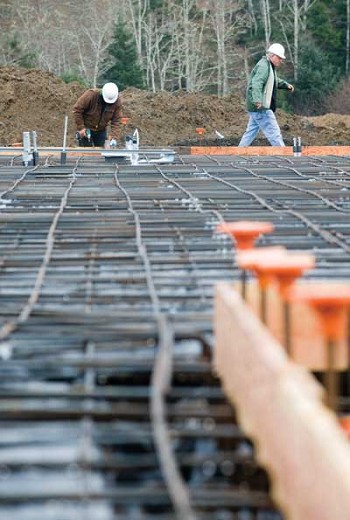 ALEX PAJUNAS - The Daily Astorian
Ed Ahlers, left, of Ilwaco, Wash., and Larry Helligso, both of Helligso Construction, make final adjustments to the bolt layout Tuesday at the Warrenton construction site of the new Clatsop County Regional Food Bank.
1 of 2

Image courtesy of Chadbourne + Doss architects
The final design for the Clatsop County Regional Food Bank is shown in this artistic rendering.

WARRENTON - George Sabol stood in shirtsleeves Tuesday morning, grinning as he watched construction workers put bolts into the foundation of the huge warehouse in Warrenton that will be the new home of the Clatsop County Regional Food Bank. So elated was Sabol that construction had finally gotten under way, he didn't seem to notice the cold weather until rain started pouring down. At that point, he sprinted to his car for a rain jacket.

Sabol, executive director of Clatsop Community Action, the 501(c)3 nonprofit that runs the food bank, and Marlin Martin, CCA's food bank coordinator and program developer, have been waiting for the new building to take shape for a long, long time. In the meantime, still operating out of the ramshackle former Darigold building near the old Astoria train station, the regional food bank supplies emergency food to all of the hot meal sites, homeless shelters and emergency food box pantries run by CCA's partner agencies in Clatsop County.

"Some call themselves food banks," Martin explained, "but really only CCA is the Food Bank." It's one of just 20 regional food banks in Oregon and it's especially vital in these tough economic times, when more and more people are hungry.

"The food we pumped out supplied almost 600,000 meals in Clatsop County last year," Martin said. "That's 23 percent over the previous fiscal year and about 50 percent more than three years ago," he said. CCA's fiscal year runs from July 1 to June 30.

Feeding hungry Clatsop County residents will be a lot easier when the modern pre-engineered steel building in Warrenton is completed. That should happen toward the end of this summer, according to Ryan Helligso, from Helligso Construction of Astoria. He said "substantial completion" is scheduled for Aug. 15, with occupancy by Aug. 31. "We expect to be done on time," Helligso said Tuesday.

He was on site as foundation work continued for the warehouse, which is rising on a 1.1-acre parcel in the Warrenton industrial park just east of the county animal shelter, donated to CCA by Martin Nygaard and Steve Olstedt.

Helligso said the 65-by-120 foot warehouse is being built to seismic standards, which is a code requirement for this region. The building should be able to withstand sustained 100 mph winds and even an earthquake. Its foundation contains 5 miles of rebar in 20-foot lengths.

Plans are in place for an extension of Ensign Lane to go through the north side of the warehouse property sometime in the future. Utility poles had to be moved to accommodate the new road.

Design featuresBecause it's on the edge of a residential area, Martin said the warehouse was designed so its loading dock will be inside the building, and will be entered through a sort of garage door. Two stout bollards protect the entrance from trucks that are backing up. A secondary inside loading dock to the west will accommodate private vehicles of people donating food or picking up orders.

The big freezer is just one of many amenities that will be available in the new food bank warehouse. It will also provide a re-pack room, where bulk foods, such as rice and beans, which cost much less when bought in 500-pound quantities, can be repacked into consumer-size packages for distribution.

The same goes for fish and fresh fruits and vegetables. "There are times when I might get 2,000 pounds of corn," Martin said. "If I can't get rid of it in time, we'll be able to freeze it and repackage it," he said. He also expects to be able process salmon, quick-freeze it and make it available in 2- to 3-pound packages.

When food arrives, it has to be dealt with, even when it's unexpected.

"It's sort of feast or famine. You don't get a lot of notice," Martin said. We'll be so much more prepared."

In contrast, the current 4,000 square-foot food bank warehouse in the old Darigold building has no heat, no hot water, poor lighting and no processing facilities, Martin said.

When the new warehouse is up and running, Martin said employees and the many volunteers who help out will be able to work much more efficiently and, with less lifting and no more slippery wooden floors, they'll also be much safer. "We'll be able to process a lot more food than we do now, in both poundage and variety," Martin said.

How it was paid forMajor funding for the new warehouse came from a $472,000 federal block grant CCA obtained in 2005. Of that amount, only $397,000 was designated for construction. The city of Warrenton agreed in 2008 to act as sponsor for the grant, which is administered by the state.

Martin thanked the city of Warrenton, Mayor Gil Gramson, the City Commission and city staff for their vital assistance with the food warehouse project. "The city of Warrenton stepped up to the plate to sponsor the grant. They contributed an incredible amount of support and man-hours on this project. They were very supportive - just awesome," Martin said.

Helligso Construction was low bidder at $867,000. CCA raised $347,000 and then secured a line of credit for the rest of the construction cost.

But by last August, CCA was still $151,000 short of construction funds and $125,000 short of funds for equipment. Still, surcharging of the property got underway and a groundbreaking ceremony for the new food bank warehouse was held in October.

Martin said unanticipated costs since then have jacked up the cost of the new warehouse to $1,143,193, which includes built in equipment such as the walk-in freezer, but not portable equipment.

For example, even after the building site was surcharged with fill and given time to settle, Helligso said it remained so spongy and springy that 70 truckloads of rock - 1,800 tons - had to be brought in before the foundation could be built. That added $100,000 to the tab. Another $90,000 was tacked on for geotechnical requirements.

Martin said CCA is hoping to raise at least $488,000 more. He said the group has six fundraisers planned over the next six to eight months and continues looking for grants.

Autumn is here, are you ready for, pumpkin spice and everything Fall brings?

Autumn is here, are you ready for, pumpkin spice and everything Fall brings?

Nothing will hold him back

Nothing will hold him back