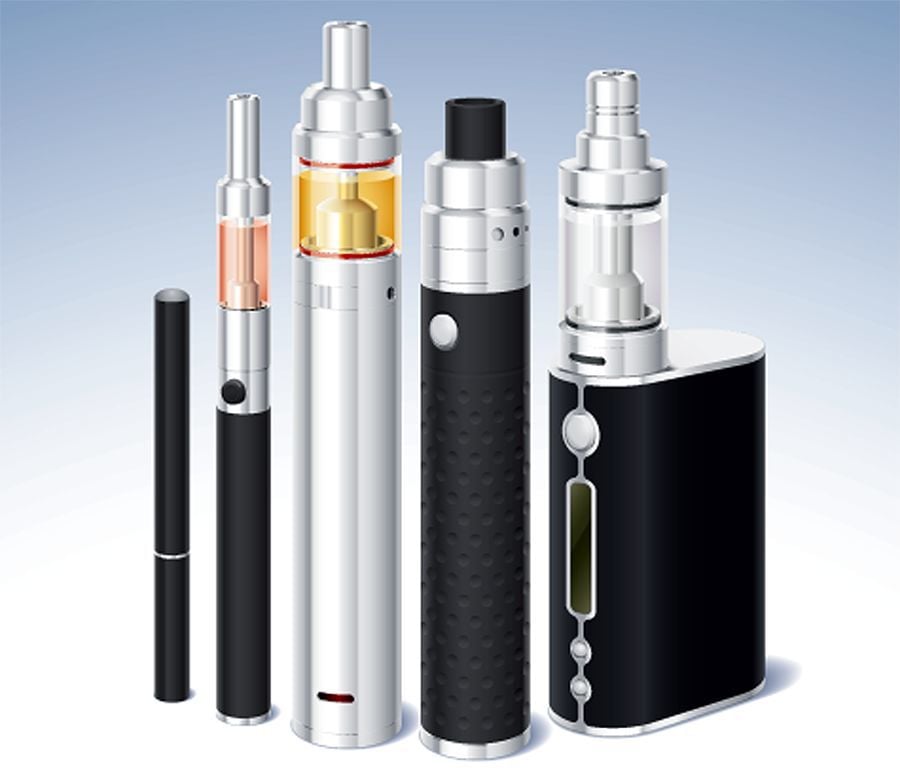 A variety of vaping devices. 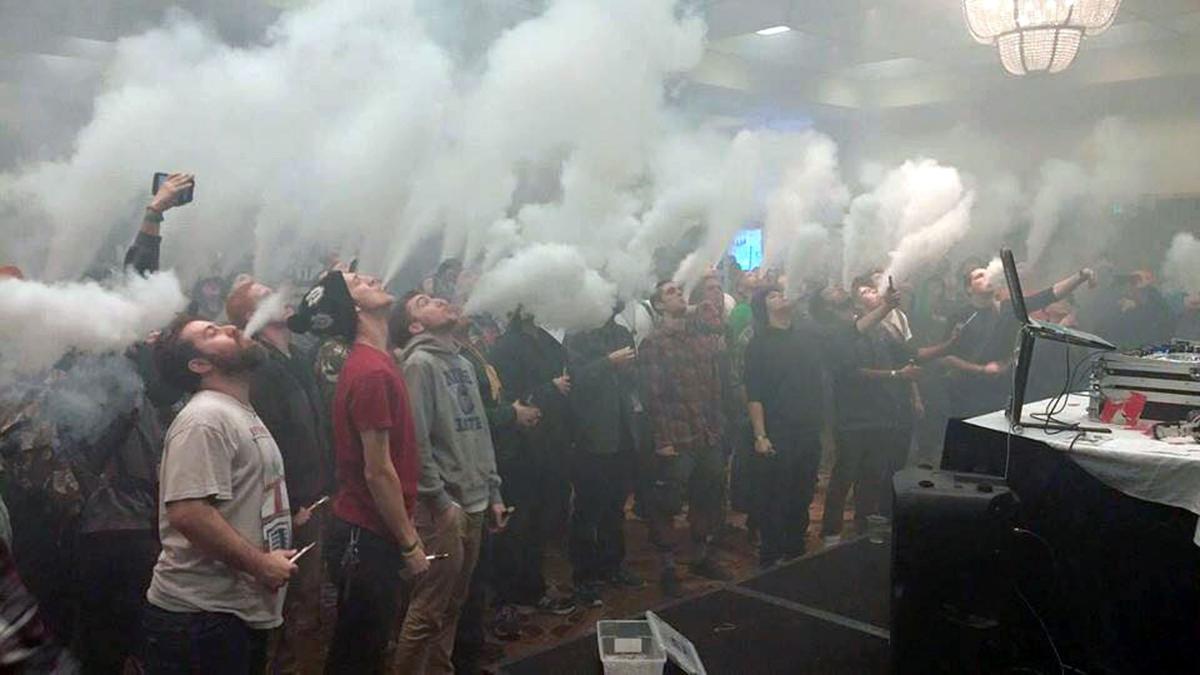 Vaping enthusiasts disappear in a cloud at a convention. 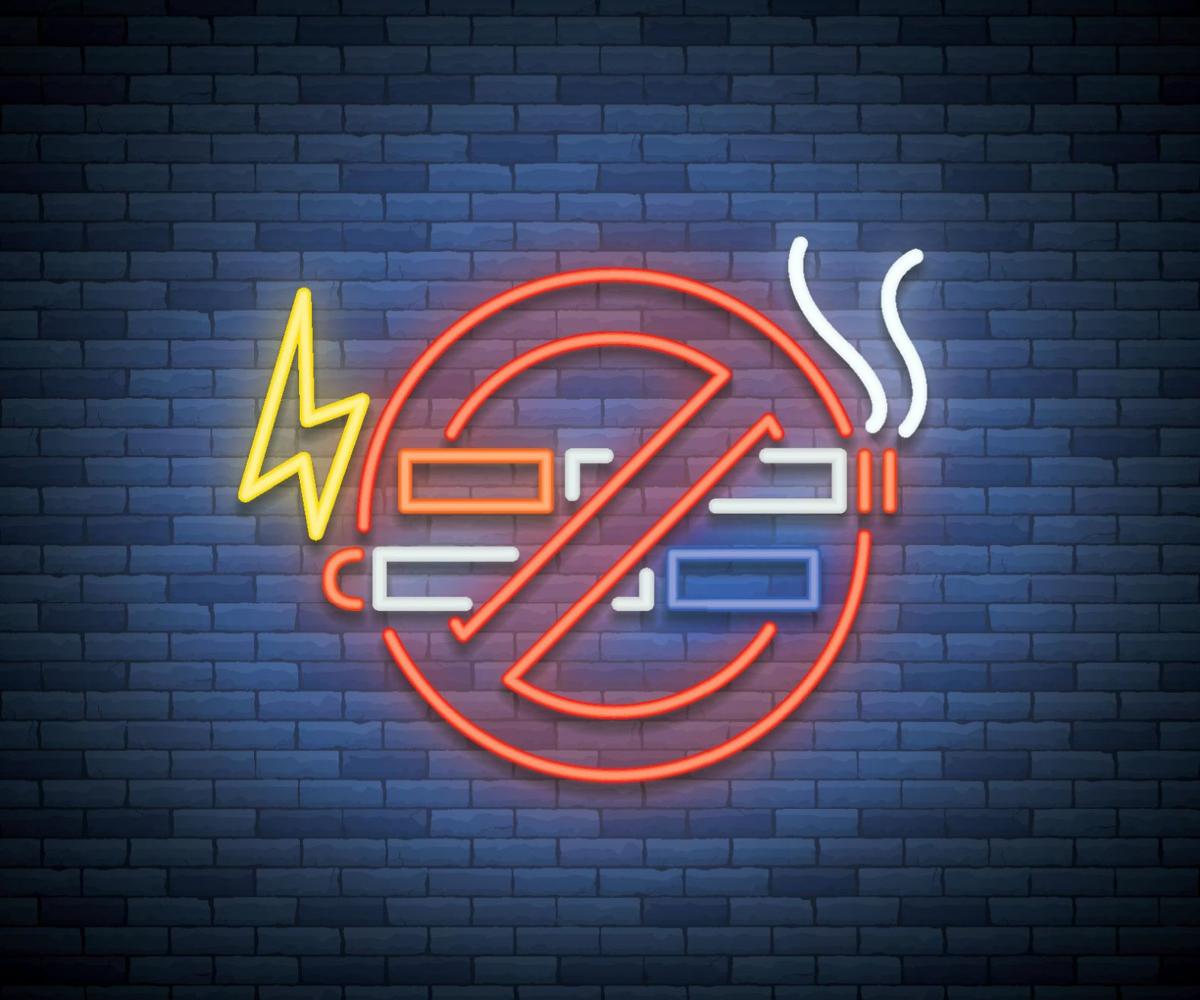 A press released from the governor’s office noted that e-cigarettes are the most popular tobacco products used by Oregon's youth, with 23 percent of Oregon 11th graders reporting using an e-cigarette in 2019, up from 13 percent in 2017.

"My first priority is to safeguard the health of all Oregonians," Brown said. "By keeping potentially unsafe products off of store shelves and out of the hands of Oregon's children and youth, we prevent exposing more people to potentially dangerous chemical compounds and help lessen the chance of further tragedy for any other Oregon family.

"I want to be clear though: the safest option for Oregonians right now is to not use vaping products of any kind," she said. "Until we know more about what is causing this illness, please, do not vape. Encourage your friends and family members to stop vaping immediately. Talk to your children about the dangers of vaping. The risks are far too high."

Brown said the best-available evidence from state and federal public health experts indicates that certain ingredients and compounds contained in flavored vaping products and additives have been found in cases of vaping-related lung injury and death. The governor also called on the federal government to act to address vaping-related illness.

"This order will help protect Oregon households in the short term, but federal action is long overdue to address this national public health crisis," Brown said. "It's time for the FDA to regulate flavored vaping products and other additives for what they are: products that are addictive, dangerous, and targeted squarely at our youth."

It was not immediately clear when the ban would take effect.

Oregon Medical Association immediately released a statement expressing strong support for the temporary ban. The advocacy group said liquid flavors such as bubble gum, fruit, and mint appeal to kids, and limiting access is an important step in preventing youth use and stopping a possible lifelong addiction.

The statement said health care organizations across the state are united on the temporary ban and continue to advocate for raising the price of tobacco products and e-cigarettes to deter tobacco and nicotine use.

“We have known for some time that vaping products – particularly those that are flavored – threaten to increase the number of youth addicted to nicotine,” the Oregon Medical Association statement said. “Given the increasing vaping-related illnesses and deaths over the last several months, urgent action is critical.”

Leadup to the moratorium

The moratorium on sales was one of six suggestions that were proposed by Oregon Health Authority after Brown requested ideas from the state agency. Education campaigns aimed at quitting vaping, federal regulation, and more input from doctors and other experts were also suggested.

“If you vape, whether it’s cannabis, nicotine or other products, please quit,” state health officer Dr. Dean Sidelinger said. “These are addictive substances, and we encourage people to take advantage of free resources to help them quit. If you haven’t started vaping, don’t start.”

Vaping product sales in Oregon are plummeting according to cannabis industry research by New Frontier Data that showed a 62-percent downturn in September.

The order calls for a 180-day ban on all flavored vaping products under the emergency rulemaking authority of the Oregon Health Authority and the Oregon Liquor Control Commission. The order also directs state agencies to develop legislative proposals for long-term solutions for consideration by the Legislature.

In addition to the temporary ban, the executive order calls for state agencies to develop plans within 90 days regarding warnings about the dangers of vaping, ingredient disclosure, products safety testing, improving reporting of vaping-related lung injuries, increasing access to federally-approved cessation services and methods, and establishing a statewide prevention and education campaign.

Executive Order 19-09 also convenes a Vaping Public Health Workgroup to advise the governor and state agencies, examine the evidence about the causes and effects of vaping-related lung injuries, and collect stakeholder feedback and input about the vaping public health crisis.

The workgroup's membership will consist of public health experts, including health professionals in epidemiology, pulmonology, emergency medicine, and pediatrics, Oregon's State Public Health Officer and Epidemiologist, representatives from the Governor's office, the Oregon Legislature, Oregon Health Authority, the Department of Justice, the Department of Agriculture, and Oregon Liquor Control Commission as well as law enforcement, the Association of Oregon Counties, and public stakeholders including from the cannabis industry and the vaping business community.

As more information about the causes of vaping-related injury and death emerges, the workgroup will make policy recommendations for lawmakers to consider and implement.

Federal health officials say 13 people have died in 10 states from vaping-related illnesses, and some media outlets are reporting higher fatality numbers. More than 800 cases of vaping-related illnesses have been reported in 46 states and one U.S. territory, primarily among youths and young adults. Those who have fallen ill in Oregon have been hospitalized after experiencing worsening symptoms, including shortness of breath, cough or chest pain.

A cause of the illnesses has not been determined, but all cases have reported e-cigarette use or vaping. Investigators and local public health authorities continue to urge clinicians to be on alert for signs of severe respiratory illness among patients and report any cases.

Vaping product bans are also reportedly in the works in Washington, Michigan, Massachusetts and Rhode Island. Federal officials have said cannabis vaping juice that was not purchased in stores was the most common factor in 514 severe lung injury cases recently analyzed.

State health officials are working with the federal Centers for Disease Control and Prevention and the Food and Drug Administration to determine the cause of deaths and illnesses in Oregon and across the nation.

Before the new illness reports, Oregon Health Authority was already concerned about the health risks of vaping products. A recent report by the agency details the health risks for the products including nicotine addiction, exposure to toxic chemicals known to cause cancer and increases in blood pressure.

Individuals who have recently vaped and are having difficulty breathing should seek medical attention immediately.

While overall use of marijuana among Oregon youth has remained flat, the primary way they are using the substance – vaping – has dramatically …