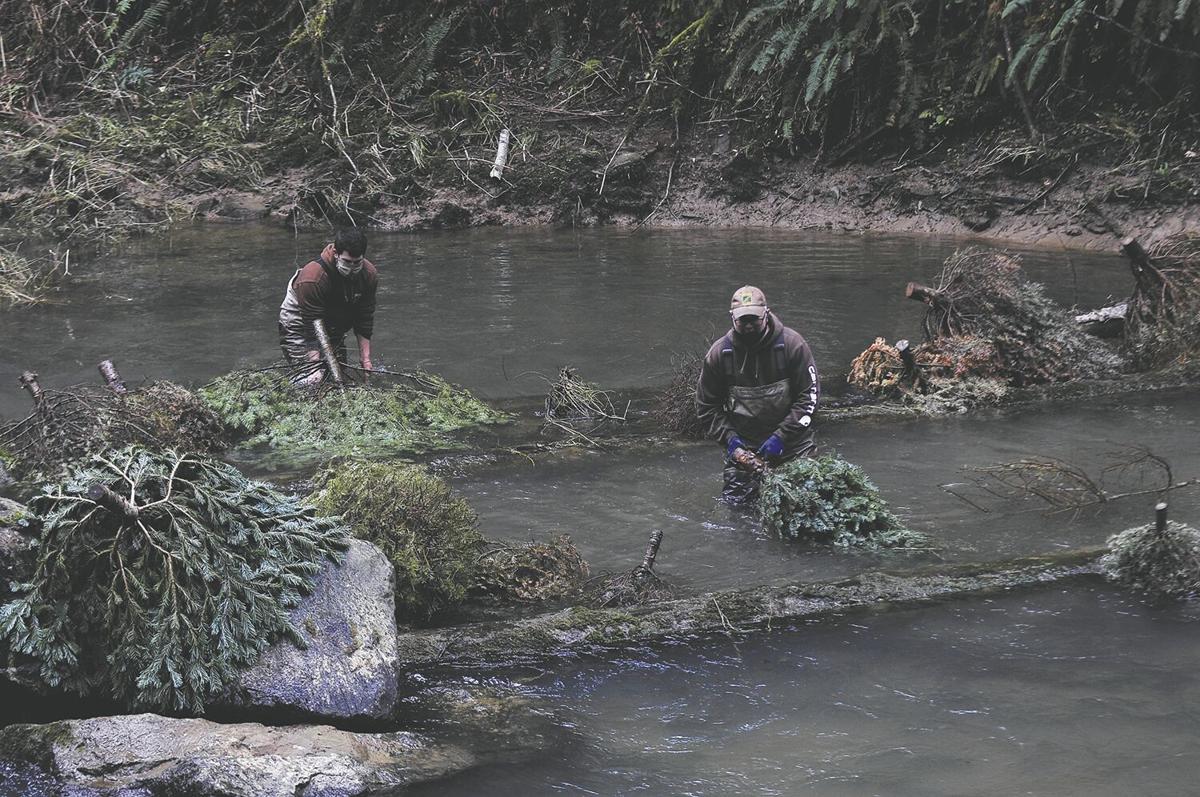 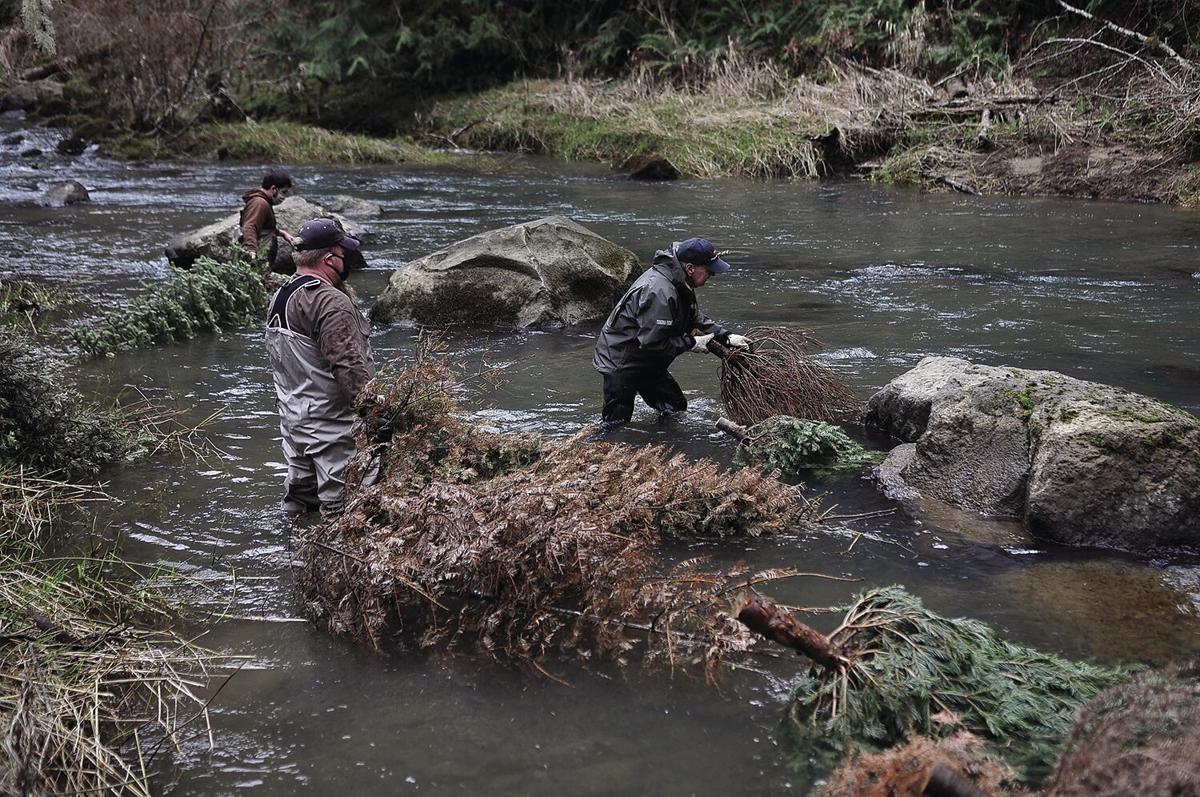 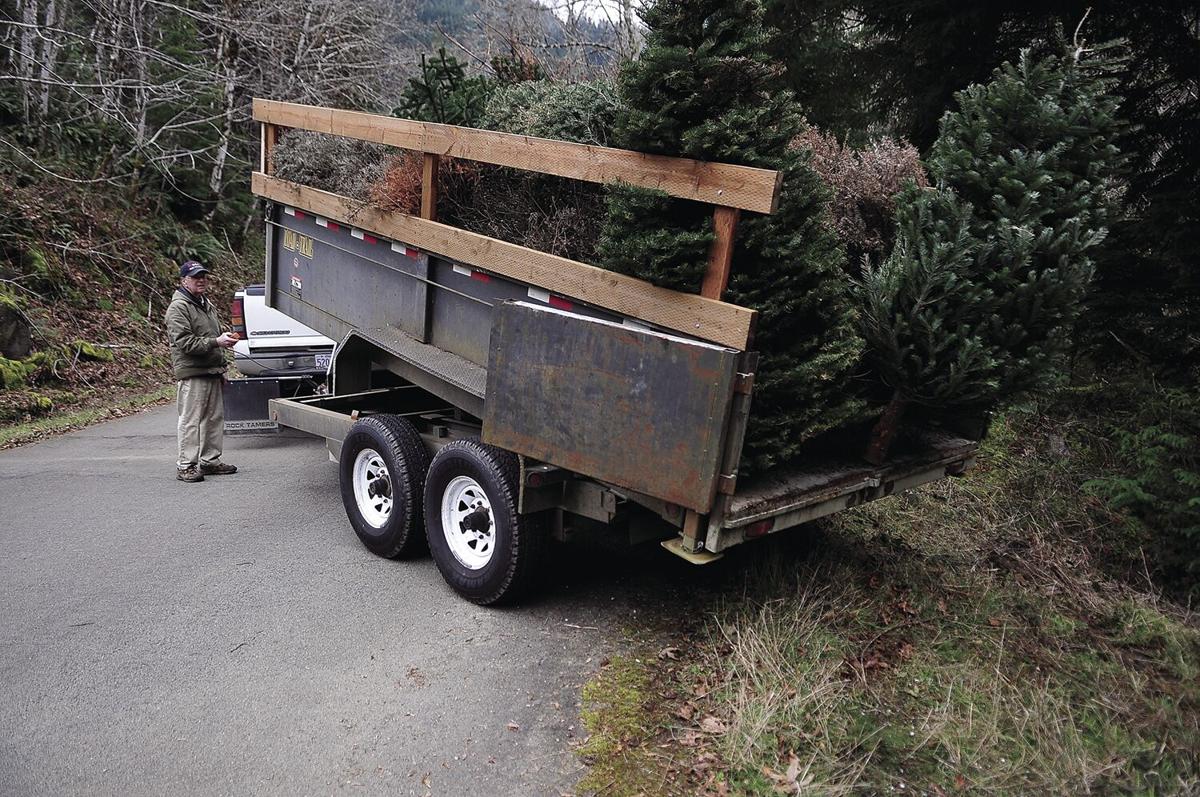 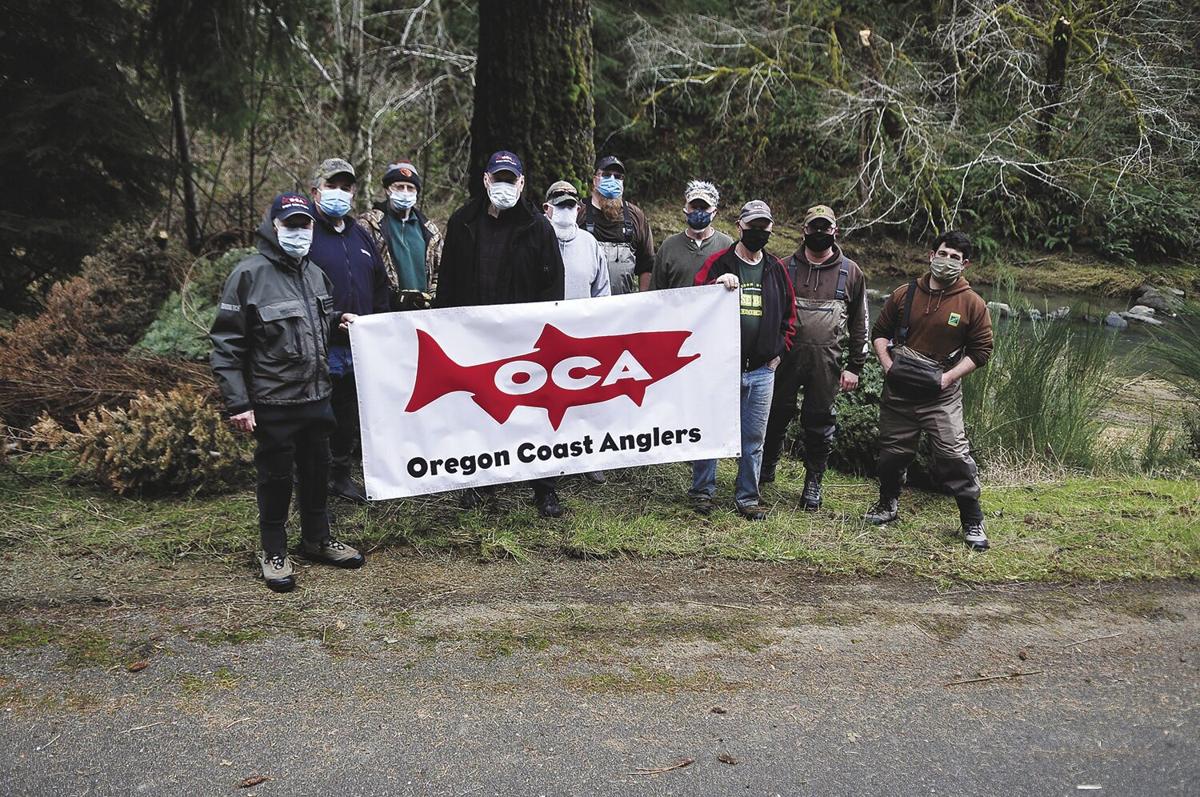 The group of Oregon Coast Anglers volunteers and Oregon Department of Fish & Wildlife staff who helped with the tree project last week pose in front of a group of the trees (left) and Camp Creek (right).

The group of Oregon Coast Anglers volunteers and Oregon Department of Fish & Wildlife staff who helped with the tree project last week pose in front of a group of the trees (left) and Camp Creek (right).

After bringing joy to families’ homes over the holiday season, some 200 Christmas trees now ideally will be bringing protection to juvenile fish in a tributary to the Umpqua River east of Reedsport.

Camp Creek provides habitat for Chinook and coho salmon, as well as a variety of other fish species.

Himmelreich and ODFW Salmon Trout Enhancement Program Biologist Evan Leonetti and the volunteers from Oregon Coast Anglers jammed the Christmas trees into crevices among boulders or logs in the creek, hoping the trees would stay in place through the spring, when heavy rains swell the creek.

“You can see some of the trees we put in last year,” Himmelreich said.

The trees are the latest additions in what has been a multi-year project on Camp Creek and some of its tributaries.

That started in 2015 and 2016 when the large boulders were added to the creek in patterns to slow the water down, forcing it to meander through the creek.

“Before, it was all bare rock,” Himmelreich said. “It was hard to find any juvenile fish.”

In addition to the boulders, over the years 170 logs have been put into the creek, also to slow the water and catch smaller rocks flowing down the creek and create spawning ground for the salmon and steelhead.

Himmelreich said over time four of the logs have broken free from their original spots.

“I was pretty upset,” he said. “These projects are expensive.”

The Christmas tree planting isn’t expensive, but it is labor-intensive and relies on the community and volunteers.

This year, about 200 trees were left at the Les Schwab Tire Center parking lot in Reedsport, which is down some from past years because some regular tree vendors did not have them for sale during the holiday season, said Steve Godin of Oregon Coast Anglers, who coordinates the volunteer effort for the tree program every year.

“This wasn’t one of our big years,” Godin said. “We’ve got enough to do the job.”

Godin said this is the seventh year Oregon Coast Anglers has worked with ODFW to plant the Christmas trees in Camp Creek and some of its tributaries, including Buck Creek.

“We had one of the highest (returns) of Chinook in Camp Creek last year,” Leonetti said. “I think it’s making a difference.”

Last week, about 20 members of Oregon Coast Anglers loaded the trees from the Les Schwab lot into trailers to be transported to Camp Creek, where Himmelreich had scouted ahead and marked seven spots to drop off trees. There a smaller group of volunteers, along with Himmelreich and Leonetti pulled them down to the creek and placed them in the water.

They took advantage of a morning free from rain and a creek that had a little lower water flow because of a relatively dry week. They had planned to do the project a week earlier, but it had rained so much that week that the creek was flowing too high.

“Normally this is an educational opportunity for us,” Godin said. “We’ve had the Boy Scouts out here as well.”

Leonetti likes that aspect, having a chance to teach the students about the life cycles of salmon and steelhead and why the stream work is important.

But due to the COVID-19 pandemic, students were not included this year.

The ODFW workers said they are grateful for the volunteer effort and for Les Schwab donating a corner of its parking lot as a tree drop-off site.

“Steve (Godin) has been great organizing this for us,” Leonetti said.

Oregon Coast Anglers has about 200 members on the South Coast, Godin said.

Registration is open for spring term classes at TBCC

Registration is open for spring term classes at TBCC