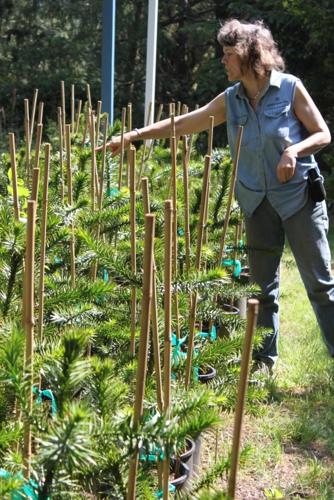 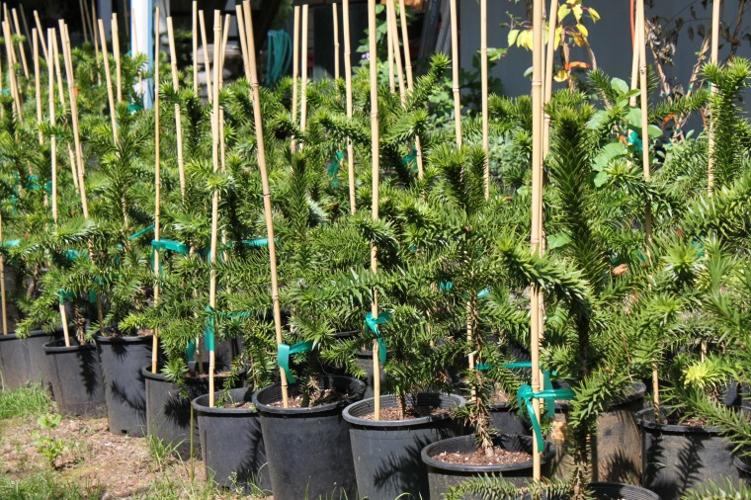 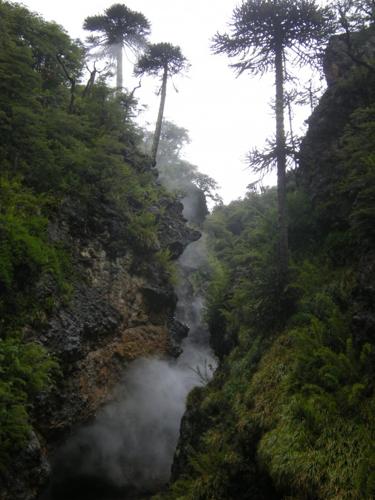 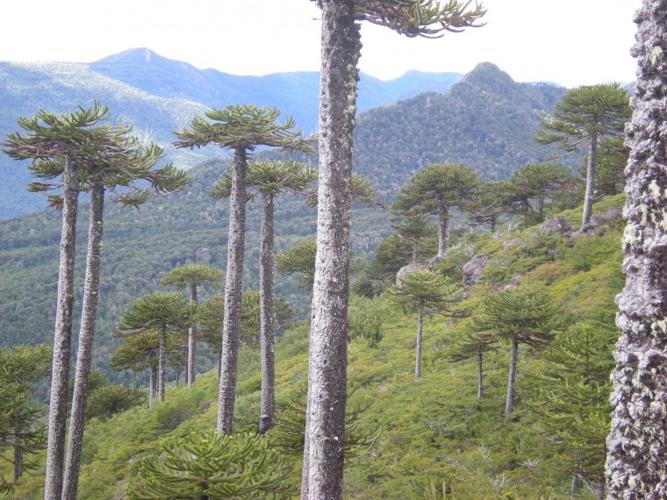 A Monkey Puzzle forest in Chile. 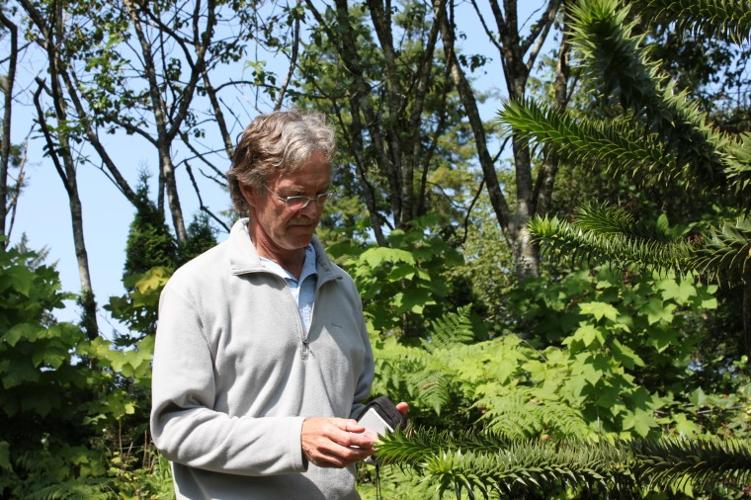 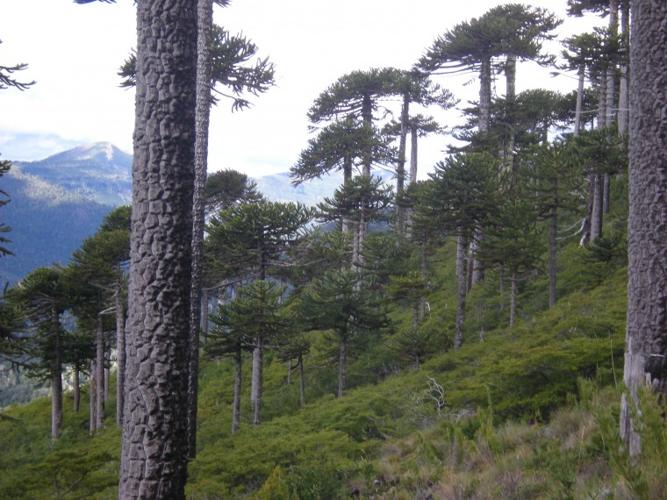 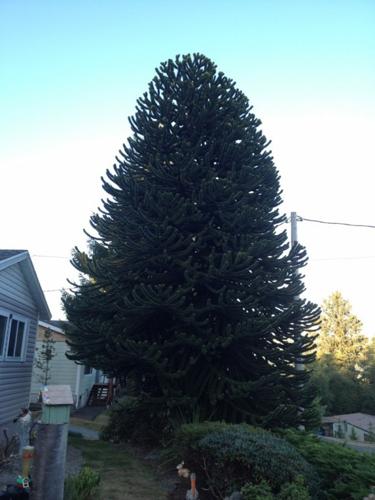 This beautiful Monkey Puzzle tree is growing in Nehalem. 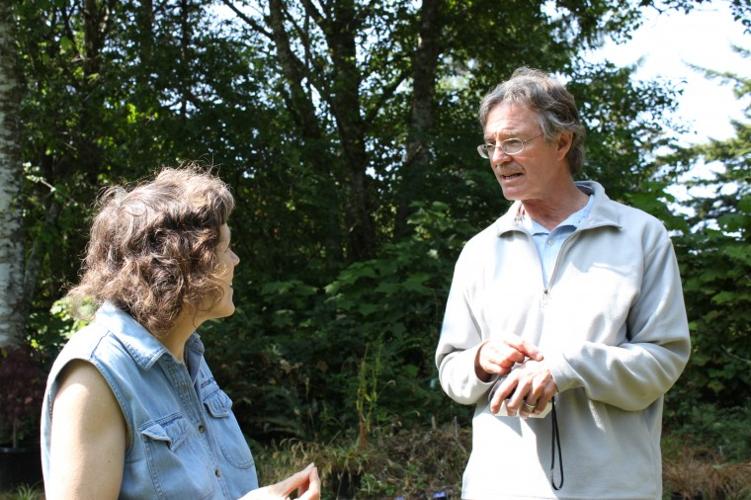 Barbara Brown and Bruce Byers talked about growing Monkey Puzzle trees when he visited her business in Pacific City. 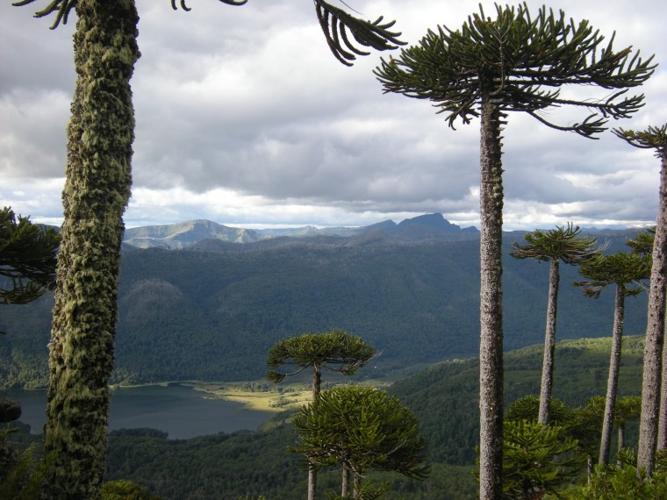 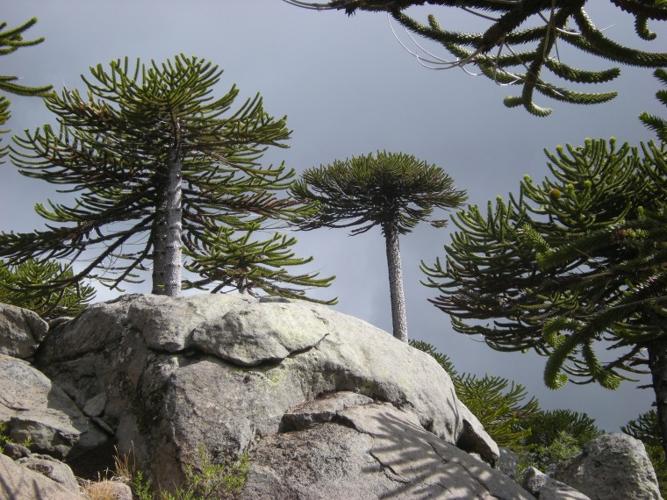 Monkey Puzzles in their native habitat, photographed by Bruce Byers.

A Monkey Puzzle forest in Chile.

This beautiful Monkey Puzzle tree is growing in Nehalem.

Barbara Brown and Bruce Byers talked about growing Monkey Puzzle trees when he visited her business in Pacific City.

Monkey Puzzles in their native habitat, photographed by Bruce Byers.

Monkey Business 101 plant nursery in Pacific City recently attracted the interest of world-traveling ecologist Bruce Byers, who was researching Monkey Puzzle trees in South America. In the process of his research, Byers did a Google search of Monkey Puzzle trees, and he was amazed to find Monkey Business 101 plant nursery on the Oregon coast in his search results.

Barbara Brown, owner/operator of Monkey Business 101, specializes in the ancient and unusual Monkey Puzzle trees native to the Andes, ‘Araucaria araucana’. She grows them from seed and sells five to six year old juvenile trees, shipping them to 23 states. In the seven short years she’s been in business, Brown has become an expert in the propagation and care of Monkey Puzzles.

The trunks are straight and true. Old Monkey Puzzle trees in their native habitat shed their lower branches and resemble hundred foot umbrellas.

Her customers refer to her as the “Monkey Puzzle Doctor;” Brown keeps in touch with her far-flung customers and helps them care for their trees, offering remote diagnoses and advice if one of her progeny trees is failing to thrive. But on the whole, they do thrive, and as a result Brown’s Monkey Puzzles are growing across the country.

In addition to being a local business owner, Brown is a beloved local character, known for wearing a Santa suit and standing on the roadside waving to passersby on 101. Brown made a presentation on Monkey Puzzle trees at the Tillamook library August 20.

On his return trip from Chile, Byers made a stop in Oregon to visit Monkey Business 101 and meet Barbara Brown, and to satisfy his curiosity about the Pacific City site he described as “probably the most Monkey Puzzles growing anywhere in the world, outside of Chile or Argentina.”

Byers was on an ecological field trip in Chile, traveling in the footsteps of the famous American naturalist John Muir, when he discovered Monkey Business 101 via Google.

“Few people know that John Muir – nature writer, champion of Yosemite, and a founding father of the American environmental movement and of our system of national parks – traveled to South America in 1911, alone at the age of 73, seeking Araucaria araucana, the so-called Monkey Puzzle Tree, in its native forests on the slopes of the volcanoes of central Chile,” said Byers.

Muir kept a journal and made detailed sketches of his trip to Chile to see the Monkey Puzzle trees; one hundred years later, Byers, an international conservation and natural resources management consultant, “began making plans to try to find and rephotograph the places where Muir saw and sketched Araucaria araucana.”

In a feat of ecological detective work Byers picked up Muir’s hundred year old trail, and even found Muir’s campsite, from which Muir sketched Monkey Puzzle trees which are still standing, “and in doing so (we) brought Muir’s last journey to the light of day,” wrote Byers. “We walked the same rocky volcanic ridge that he followed, with its weird and wonderful old umbrella Araucarias. We listened to voice of the ‘brawling bouldery stream’ in Ruca Choroy beside which he must have camped. We can now share images of those views, those trees, that stream, that ridge he sketched.”

Byers shared his story and photos of the Monkey Puzzle forests in Chile when he visited Barbara Brown’s nursery in Pacific City. He contrasted photos of the towering trees in their native habitat, as big as old growth Douglas firs, with Brown’s tender, young specimens, and he marveled at the tree’s adaptability.

Monkey Puzzle trees have existed for 60 to 100 million years. In their native habitat they live only on the slopes of the central volcanoes in the Andes of Chile and Argentina. They are the national trees in Chile, where they are protected.

There are some nice specimens in Tillamook in an eastside neighborhood near the middle school. There are also some outstanding Monkey Puzzle trees in Portland, which can be dated back to the 1905 Lewis and Clark Centennial Exposition World’s Fair. A Chilean emissary to the World’s Fair brought Monkey Puzzle seedlings and distributed them to Portlanders.

Those trees are now arboreal icons in the Rose City, and if Barbara Brown has her way, a hundred years from now the trees she has started from seed will bear witness to her passion for the Monkey Puzzle.

Do you support the Supreme Court decision last week overturning Roe vs Wade?

Do you support the Supreme Court decision last week overturning Roe vs Wade?

Prepare, be aware and stay safe while exploring Oregon's outdoors

Guest Column: Tales from the library

Independence Day is for freedom, fun – not forest fires

I was reading something on http://www.absolutewealth.com/ when I came across with your article.I must tell you that this is great and I think that a business like this can only be profitable.It is new and people love new things.

I just love that nursery and the owner. She was there for me when I needed help and advise.

Prepare, be aware and stay safe while exploring Oregon's outdoors

Guest Column: Tales from the library

Independence Day is for freedom, fun – not forest fires