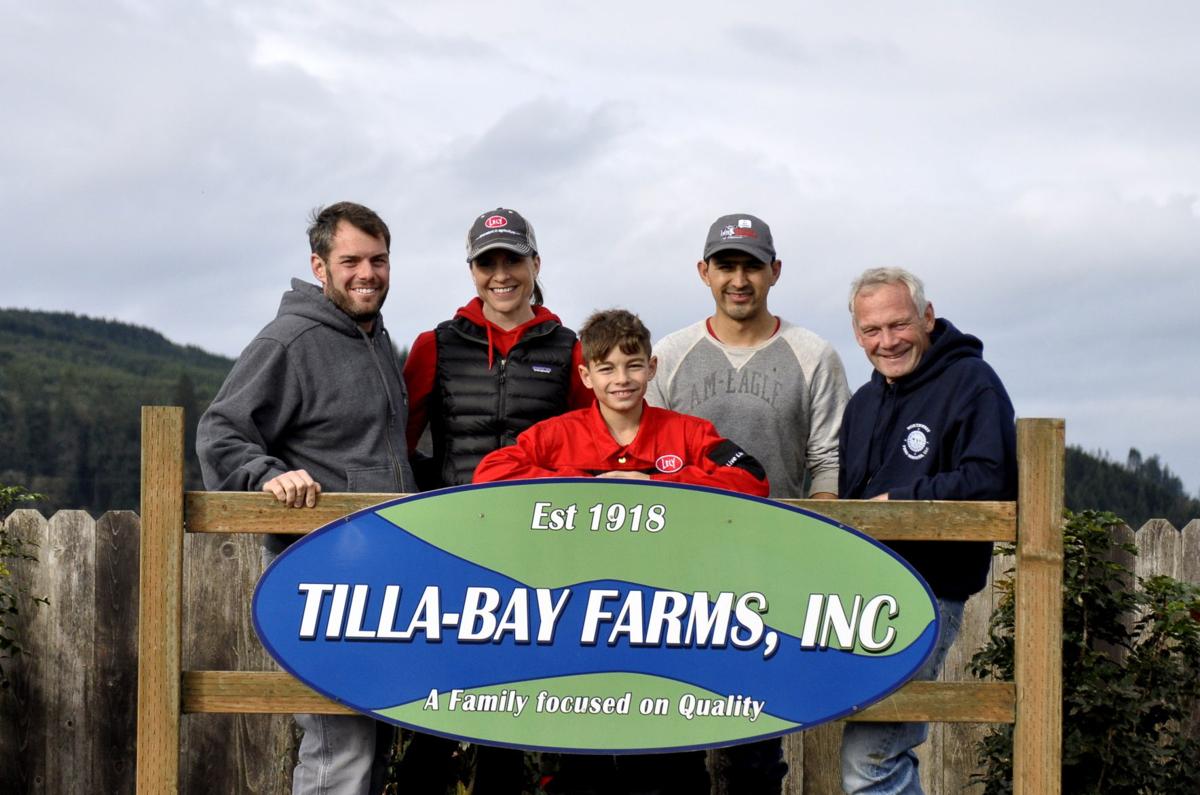 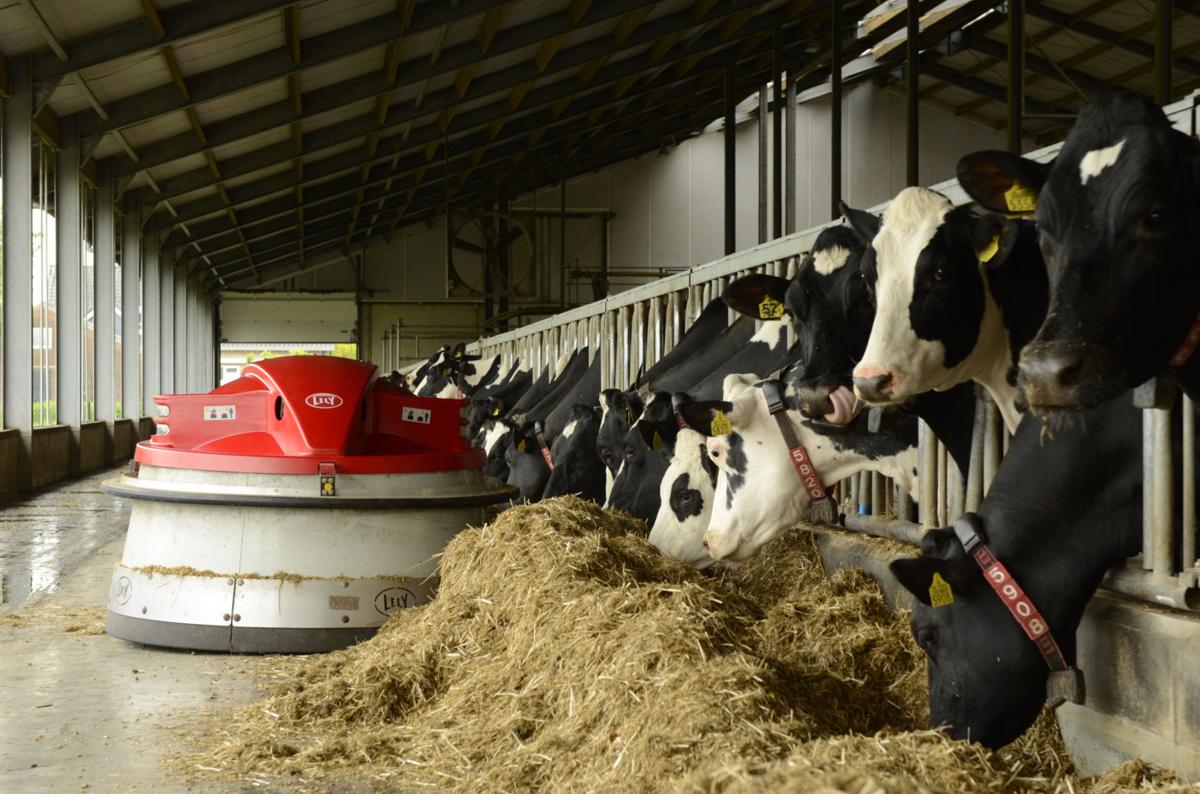 During the winter months, when the cows are locked inside, they are fed in the barns.

During the winter months, when the cows are locked inside, they are fed in the barns.

In 2010, dairy farmers Bart and Kurt Mizée had reached a point where they needed to carve more flexibility into their working day. Their answer was to install the first robotic dairy milking system in the Western U.S. the following year.

To date, the farm’s three robots have milked the farmers’ 180 cows nearly 1 million times. On average each cow visits a robot 2.8 times per day.

“Five years ago (other dairymen) thought we were crazy and now they realize it will work,” said Kurt Mizée, the farm’s fourth-generation owner. “We changed perceptions.”

Six years ago, the Mizées were at a crossroads. Their herd had outgrown the double eight herringbone-style milking parlor. Both men said they felt the need to balance work and personal life and began discussing a newer, faster milking parlor.

Then, after watching a simulated robotics demonstration given by a dairy sales company in Tillamook, the partners agreed to research robotic milking units. They were drawn to the idea that with a robotic system, the milking parlor was available to each cow whenever she wanted to be milked, rather than on a specific schedule set by humans.

Integrating such a new technology on their farm wasn’t a far stretch for this five-generation dairy farm family.  Rudy Fenk, 90, is the farm’s second-generation owner. “I was one of the first guys to go with the technology,” recalled Fenk. “I wouldn’t be here if it wasn’t for the new ideas.”

Kurt Mizée traveled to Tulare, Calif. for the World Ag Expo, February, 2011 to see further robotic demonstrations and to speak with sales representatives.

While Kurt was at the expo his wife, Wendy, and daughter, Shelby, 8, died in an automobile accident. Kurt was faced with the reality of raising his son, Ryan, 5, as a single parent. Fewer hours at the farm became a necessity, rather than a hoped-for dream.

“For us, (this decision became a) quality of life issue,” explained Kurt Mizée.

An exciting new challenge was learning about each cow in a digital way. Every cow has a transponder on her neck collar that digitally connects with the robot each time she’s milked. The robot then tells the main computer how much milk she produces, how many steps she takes in the day, how much she eats while being milked and other information.

They can also detect if a cow is getting sick long before she shows physical symptoms by knowing if she moves less and eats less during the day. This information, Kurt Mizée said, means they can better give preventative care to each cow.

“How could you know that you were going to know every cow again in the way that your grandfather used to?” asked Kurt Mizée. “The method of getting the information is different, but it allows us to give each cow custom care.”

“I still think it was the right move for us to head this direction,” said Bart Mizée. “Pioneering it from a couple of different viewpoints has had its challenges.”

One of the greatest challenges the family discovered was finding knowledgeable staff to service the units and walk farmers through the first few weeks as they transition from a conventional milking parlor to a robotic one.

Kurt solved this issue last year by launching his own business, “Priority Robotics of Tillamook.” This new company focuses on the sales, installation and service of Lely Robotic Milking Systems.  When Bart and Kurt launched their robotic dairy five years ago they said they didn’t feel locally supported, yet through perseverance were able to succeed and now flourish.

Two years ago, Kurt remarried. His wife, also named Wendy, brought two daughters to the family and is a partner in the new business.

“Without the robots, we’d all be fine,” Wendy Stevens-Mizée said. But having the robots has, “allowed him to be a dad. He can take the kids to school. On Christmas, we have a fire and open presents and those robots make that happen.”

Road signs are put up to keep drivers safe, according to Tillamook Police Chief Terry Wright.

Which is your favorite marijuana dispensary in Tillamook County?

Tillamook County has recently added another marijuana dispensary. Which is your favorite?

The Tillamook Forest Center closed out its 2016 schedule Sunday with its final wreath making class.

The time has arrived for volunteers to help trace the reach of the year’s highest tides.

Schubert Moore has written and released “The Monster Chasers,” a children’s book about Lily, a four-year-old girl as the hero.

The Garibaldi Museum closed to the public for the winter after a big weekend, according to the manager.

Tillamook County has about two months to decide if it wants to opt out of a $1.4 billion class-action suit, against the Oregon Department of F…

Learn about flower arranging and make a beautiful holiday flower arrangement in a class taught by Joy Jones at the OSU Extension Service.

Football in Tillamook got the most out of 2020

Guest Column: Getting through tough times

Sharing, helping our heritage through the Tillamook Coast History Alliance

Letter: Try a plant based diet during Lent

Football in Tillamook got the most out of 2020

Guest Column: Getting through tough times

Sharing, helping our heritage through the Tillamook Coast History Alliance

Letter: Try a plant based diet during Lent