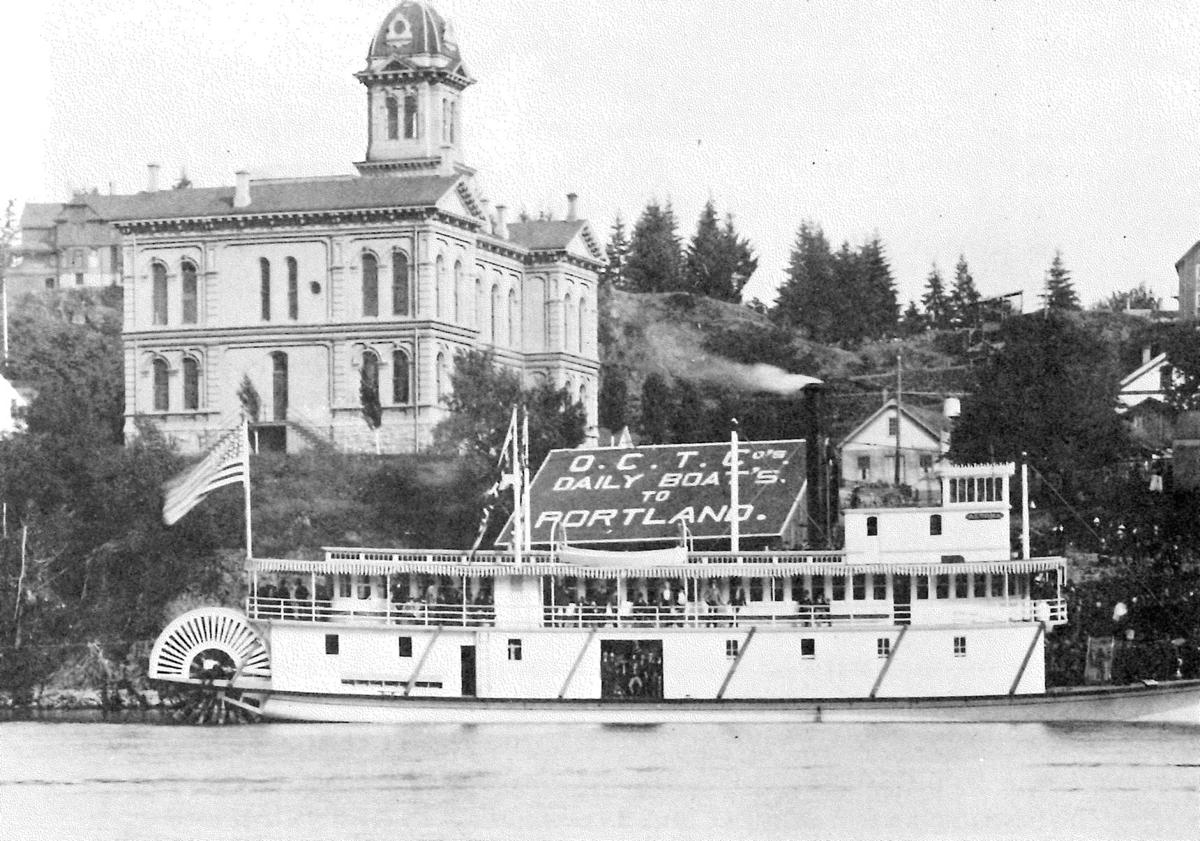 The Oregon City Transportation Co’s riverboat Altona docked at its home port, with the Clackamas County Courthouse in the background, circa 1895. 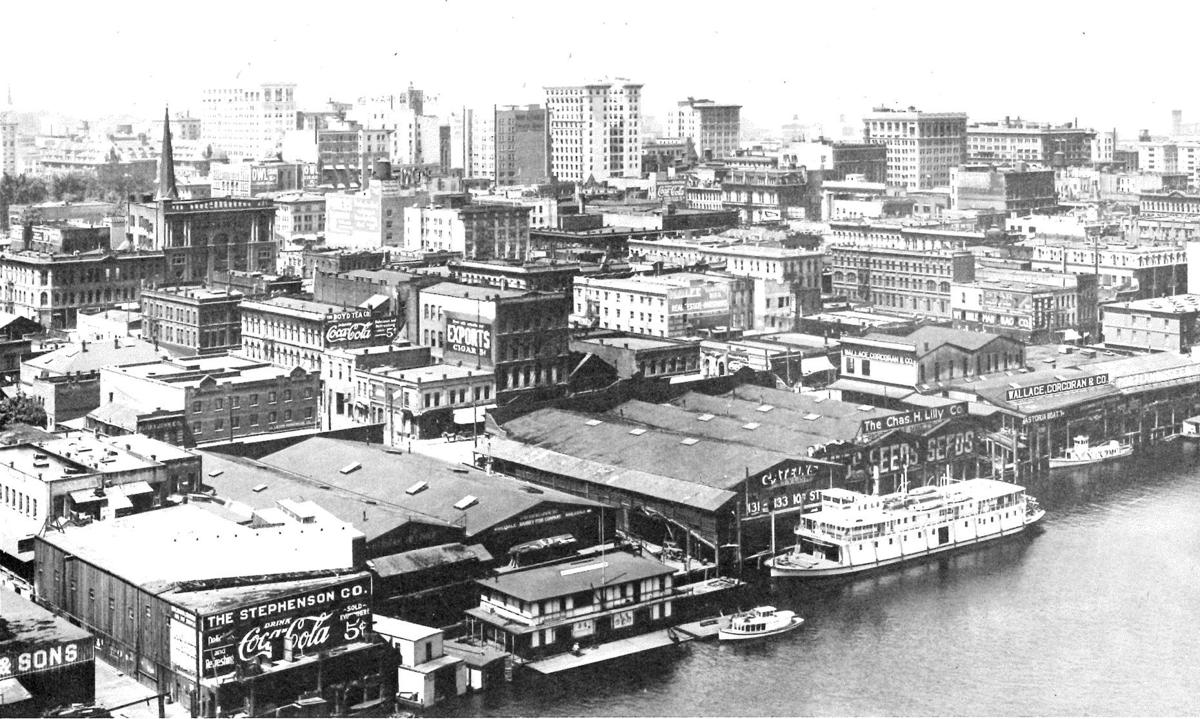 The Oregon City Transportation Co’s biggest riverboat, the Grahamona, docked at the foot of Taylor Street in Portland in 1914. 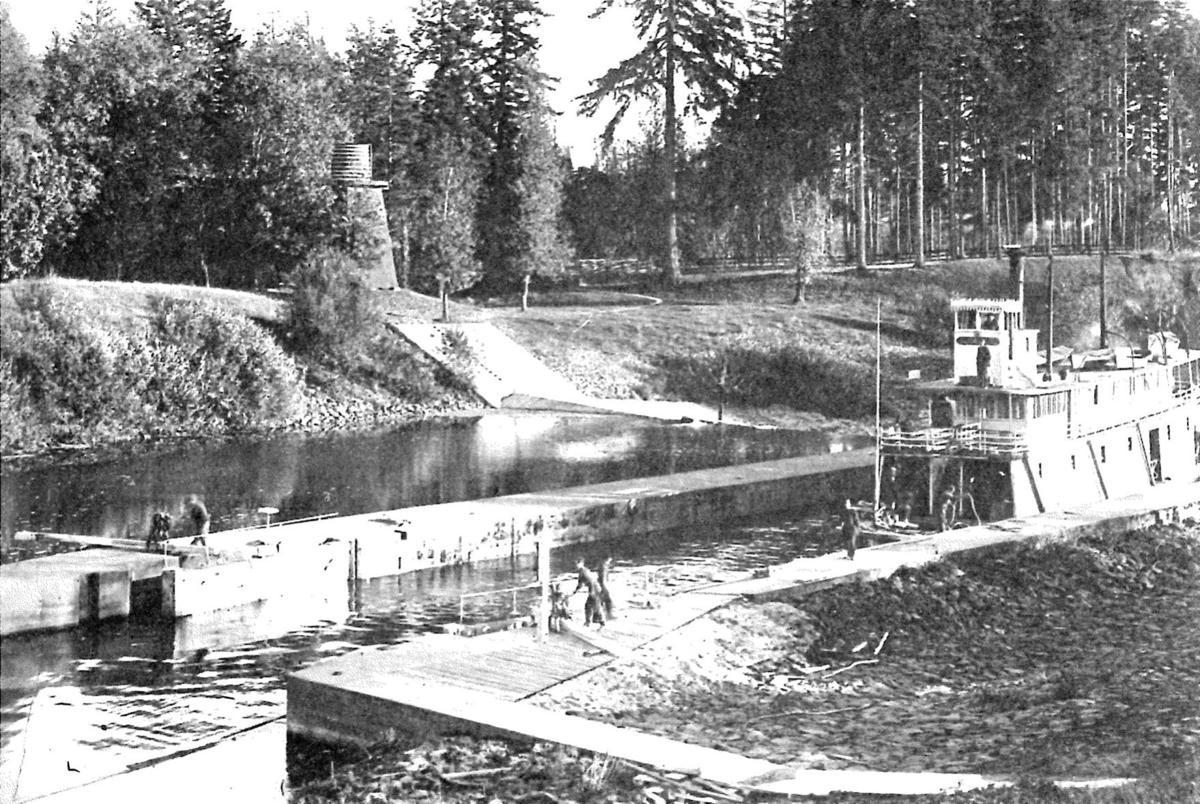 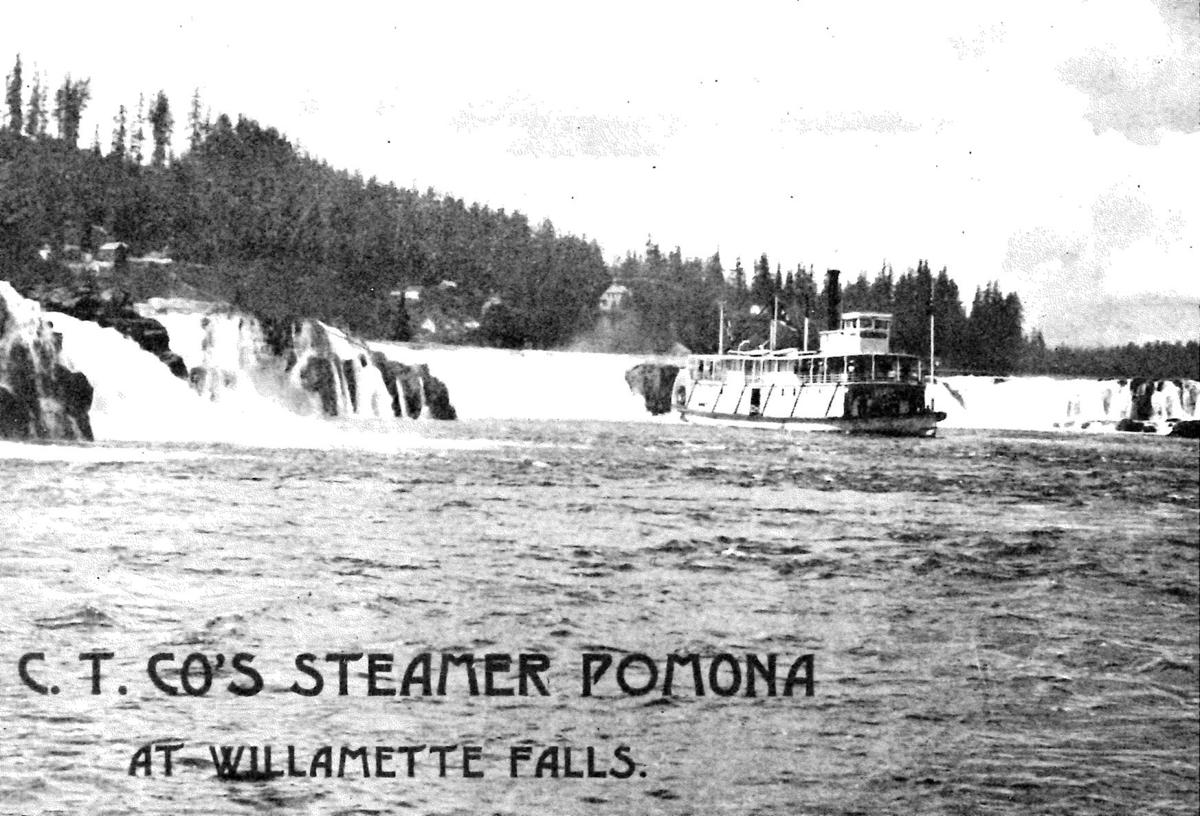 The Oregon City Transportation Co.’s riverboat Pomona in a promotional image, just below Willamette Falls, circa 1899.

The Willamette River was running high and wild on the morning of Feb. 5, 1890, as Alden and Arthur Graham set out from Oregon City in their sternwheel riverboat for the daily run to Portland.

They arrived in Portland in what must have been record time, dodging logs and small floating buildings along the way, and promptly canceled the return trip. It was just too dangerous to even try charging into the teeth of all the fast-moving debris.

But after they arrived, they learned that theirs was the only riverboat between Willamette Falls and the Portland bridges — and there were some things floating down the river that could potentially damage or even destroy those bridges. So, back out into the torrent they went, to the rescue.

“Our first job was to meet two warehouses of furniture owned by I.F. Powers that had gone adrift upstream,” Alden recalls, in his unpublished memoir. “The first one we missed, and it crashed into the Morrison Bridge. But the second one we caught and towed to safety."

Then it was down to Ross Island to rescue a herd of dairy cows that were about to be swept away by the rising waters.

The brothers finished the night with a moonlit run up the river to intercept a barn which had floated off its footings and was on its way to the bridges. This they found securely jammed up on the banks near Ross Island, so they left it alone and called it a night.

“It had taken us over an hour to get that far upstream but less than half that time to return,” Alden writes, “drifting stern-first and taking no chances on fouling our (paddle) wheel or rudder and becoming a casualty ourselves!”

It wasn’t exactly “just another day” in the life of the owners of a small steamboat line, but it wasn’t unexpected either. In fact, during the 1861 flood, at least one riverboat steamed out across the flooded valley floor, going from house to house to rescue people stuck on the roofs.

Throughout the late 1800s, the sternwheel riverboat was the predominant icon of life along the Willamette and lower Columbia rivers — as the sidewheel boat was along the Mississippi.

ALDEN GRAHAM HADN’T had any thoughts of starting a steamboat line when he first arrived in Portland from Nova Scotia. He was the son of a ship captain there, and his brother Arthur had followed in the old man’s footsteps; but Alden had decided to seek his fortune in Oregon, and so, in 1879, off he went.

In his new home, he tried several lines of work before settling into a position at Lipman & Wolfe’s dry-goods store. And he was rapidly rising through the ranks there when a weekend excursion changed his life.

“Two of us (rowing club members) paddled from Portland to Ilwaco, near the mouth of the Columbia, in our canoes,” Alden writes. “It took us three and a half days. We returned to Portland via steamboat, an enjoyable experience which also opened my eyes to the possibilities present in the booming steamboat transportation business. … Thereafter my interest in dry goods waned and I devoted my spare time to scouting around for a small steamboat operation that we Grahams could handle.”

Alden also started writing letters to his father, John, and brothers, Arthur and Newton, urging them to come west and join him in the venture. Soon they did.

The result, in 1885, was the purchase of a tatty little 100-foot sternwheeler, the Altona — which brother Arthur, the former ship captain, immediately set about restoring to immaculate and perfect order.

THE GRAHAMS NAMED their operation the Oregon City Transportation Co., but locals all referred to them as “The Yellow Stack Line,” because Arthur had painted the smokestack of the Altona bright yellow. The line fit nicely into a little niche between the big freight operations that were then scrapping for the Willamette Valley wheat-shipping business above the falls, and the even-bigger Oregon Railway & Navigation Co., which was at the time battling it out with U.B. Scott for the Columbia River passenger business. They specialized in twice-daily runs from Oregon City to Portland. And they’d chosen wisely — there was literally no competition for that run in 1885. The larger operators considered it too small to put a boat on.

“We would stop any place for anything,” Alden recalls. “A single passenger or a few bags of farm produce. A cloth ‘flag’ on a stick with a note attached giving the shipper and consignee’s name was sufficient to assure shipment to either Portland or Oregon City. … This resulted in goodwill which carried on through the years and helped us when we did get competition later on.”

Sometimes they didn’t even have to stop the boat to take on cargo. “During the salmon run each year … commercial fishermen with boatloads of netted salmon between Portland and Oregon City would hail us, and, as we slowed down, would come alongside and toss their salmon aboard for shipment to Portland,” Alden writes. “These were loose fish, so each shipment had to be separated from others by making cordwood bins, with each bin duly tallied and tagged by the purser as to number of salmon, shipper, and consignee. Our biggest year for loose salmon was 1889, when we carried 16,874.”

TIME MARCHED ON. In 1893 an electric railroad was built linking Portland with Oregon City, and the competition cut deeply into the Grahams’ passenger business; the riverboat ride was scenic and lovely, and the Grahams ran an excellent restaurant on board, but the train ride was much faster. Their fleet having expanded to two boats, they found they only had enough business for one; so they sent the other boat through the Oregon City locks to battle it out with the freighters on the upper river.

They expected a hard fight. But at about the same time, someone discovered hops as a Willamette Valley cash crop, and suddenly there was a huge seasonal demand for transportation of hop pickers to and from the fields. This boom was very timely for the Grahams, who had expected to have to fight for market share with the wheat-freighters.

RIGHT UP THROUGH the outbreak of the First World War the Grahams’ fleet of “Yellow Stack” riverboats continued to ply the upper Willamette, bringing loads of passengers, hops and wheat down the river to Oregon City over high waters or low shoals. After 1911 or so the passenger business dried up, as the Oregon Electric Railway extended service all the way to Eugene; but there was always freight to be hauled, and so much of it that they actually had another boat built, the Grahamona, a 150-foot humdinger that could pack 250 tons and drew just three feet of water.

But around the time of the war, the “Good Roads” initiatives had created a national infrastructure of highways that the riverboats couldn’t beat. Heavy motor trucks were less expensive to run than steamboats, and they could pick up a farmer’s wheat from his actual barn rather than requiring everything to be hauled to the wharf for shipping.

By 1918, the Grahams, recognizing the writing on the wall, shut down their operation and sold off their floating stock.

“The Grahamona made her last run from Corvallis (to Oregon City) for the O.C.T. Co. in May, 1918,” Alden writes, “and, as I write this in 1941, no other steamboat line has been able to restore the reliable Willamette River service we carried out for the 32 years of our corporate life. I doubt if any ever will. It was the end of the steamboat era.”

(Sources: “Dad’s Memory Locker: Recollections of Portland and Willamette River Steamboating a Century Ago,” an article by A.G. Graham published in the September 1982 issue of Oregon Historical Quarterly)

Offbeat Oregon: With a friend like A.C. Edmunds, early suffragists needed no enemies

One of the most dramatic things that can happen in a soccer game is an “own-goal.” Not the kind where a player on offense bounces a shot off a…

This season, Tillamook baseball finished with a record of 7-8, which were more wins than the team had since 2014. The team had three players r… Read more

Happenings at Hangar B

Letter: Do your own research

Guest column: Tales from the library

This season, Tillamook baseball finished with a record of 7-8, which were more wins than the team had since 2014. The team had three players r… Read more

Happenings at Hangar B

Letter: Do your own research

Guest column: Tales from the library