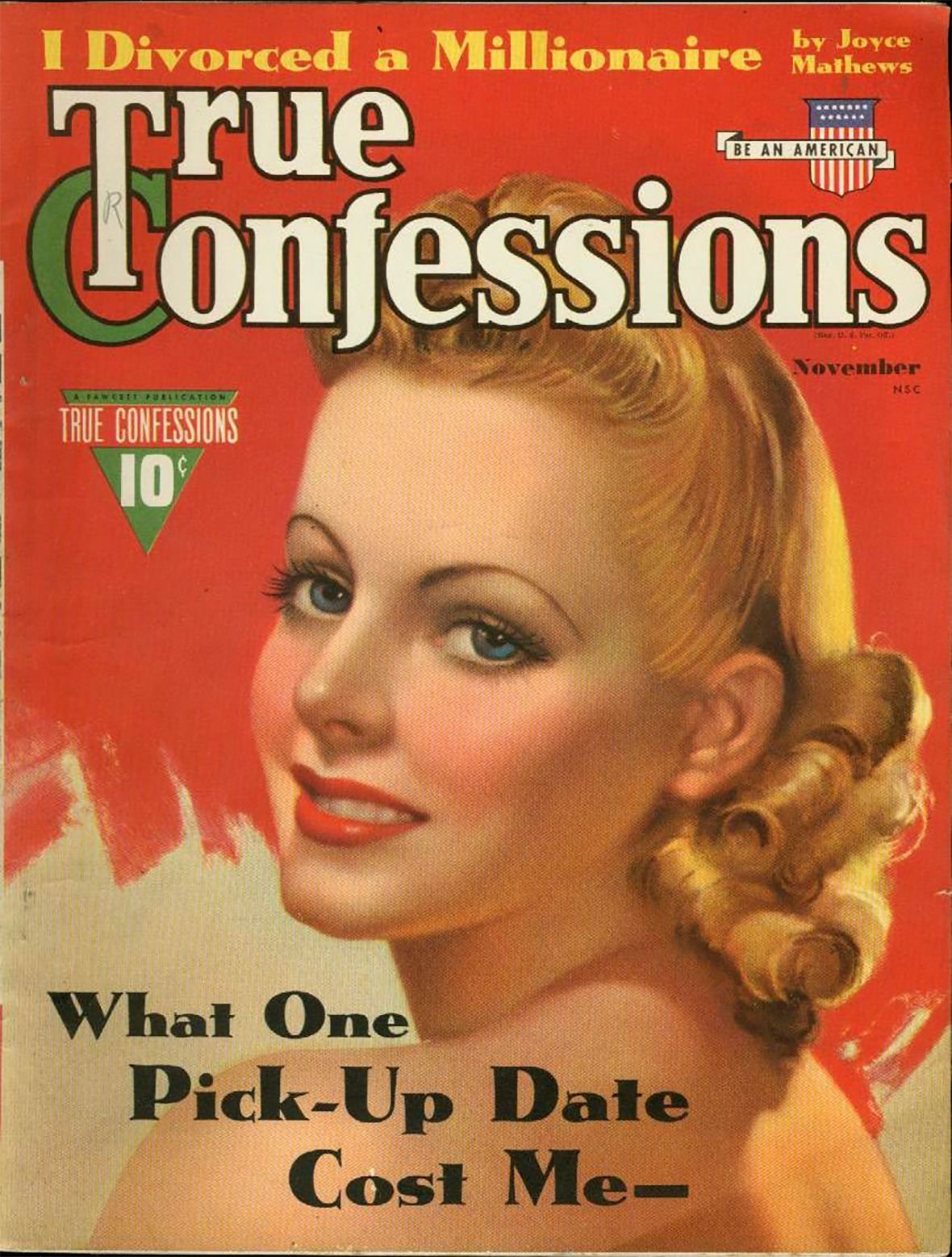 A typical issue of True Confessions magazine. This is the literary genre of the first book published in Oregon. 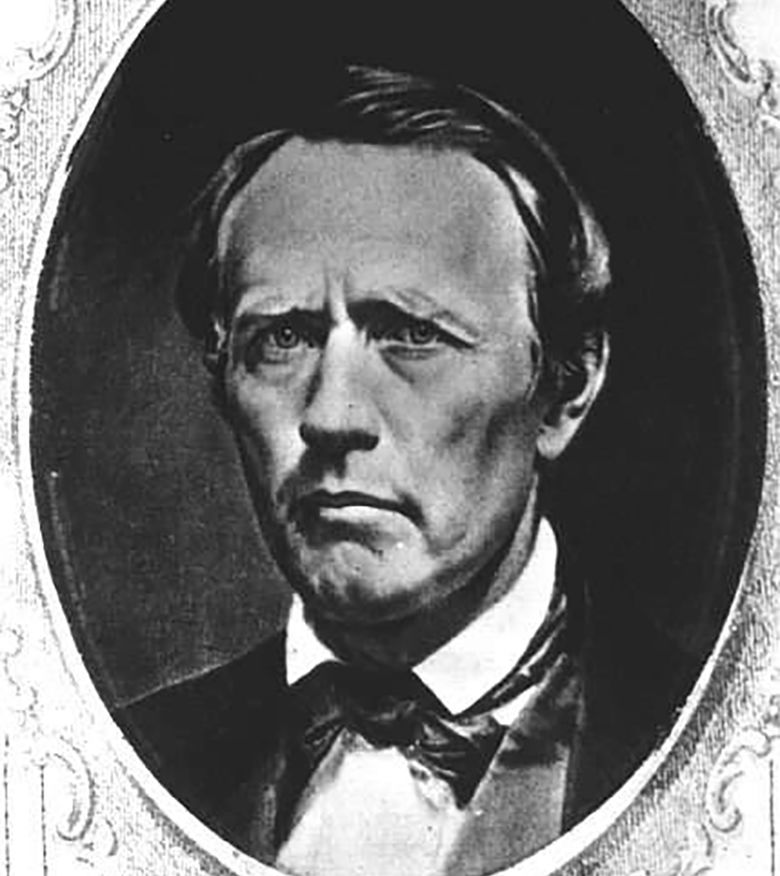 William Willson, founder of Salem and ex-fiancé of Margaret Bailey — whose questionable claim to have “sinned with her” basically ruined her life.

A typical issue of True Confessions magazine. This is the literary genre of the first book published in Oregon.

William Willson, founder of Salem and ex-fiancé of Margaret Bailey — whose questionable claim to have “sinned with her” basically ruined her life.

True Confessions stories are not in great vogue today, because modern culture is a lot more forgiving of the sort of things that could cause a person (a woman, usually) to fall from grace 100 years ago. But not too many years ago, they were very popular, especially in pulp magazines. Respectable, established women would buy magazines like True Confessions and I Confess, and read the supposedly-true stories in them with the kind of vicarious fascination that slasher movies and videogames like Grand Theft Auto evoke today. It was a chance to experience, in pretend-space, the excitement of making the sorts of bad but thrilling decisions that lead to great short-term fun and excitement and terrible long-term outcomes — without experiencing those long-term outcomes.

And it’s on this genre that the literary firmament of the state of Oregon is founded. Specifically, it’s founded on the first novel-length work of fiction to be written and published in the Oregon Territory — or anywhere else on the West Coast — back in 1854: The Grains; or, Passages in the Life of Ruth Rover, with Occasional Pictures of Oregon, Natural and Moral — by Margaret Jewett Bailey.

MARGARET JEWETT BAILEY WAS not only Oregon’s first author of novel-length fiction, she was also the West Coast’s first published female author, and its first female newspaper journalist.

She was also one of the most colorful characters of a remarkably colorful age. She could be absolutely savage when she felt the situation called for it ... and, in fairness, it has to be admitted that her situation seemed to call for it rather a lot. But her response, when done an injustice, was usually to escalate to full nuclear war on the spot; and this seems to have caused her more trouble than the initial injuries ever did.

She was born in 1812 in Massachusetts. When she was 17, she attended a Methodist tent revival, converted, and soon was making plans to join a missionary expedition to the Oregon country, to “bring the Light of the Word to the Red Man,” as contemporary writers put it.

She wound up as the only single woman attached to the missions operation of Jason Lee, near Salem; her duties there were basically to serve as a school teacher.

Disillusionment came fast. Jason Lee struck her as a fast talker with no actual executive ability. All the missionaries seemed very intent on staking claims and building temporal empires, and mostly uninterested in ministering to the Indians. And the pupils that came to her classroom were largely unhealthy or uninterested.

Margaret was not the kind of woman to keep quiet about this sort of thing, and her assertiveness led her to increasingly frequent crossing of swords with the leaders of the mission. With the idea that what was needed was to hook her up with a nice steady husband who could order her to sit down and shut up, they started pressuring her to pick a mate and get married. Specifically, they wanted her to marry William Willson, later the founder of the city of Salem.

The two were soon engaged, but then Margaret found out Willson had written to a woman back east asking her to travel to Oregon and marry him. Margaret balked; Willson tried to force the marriage to go forward by claiming to have had pre-marital sex with her; and the other leaders of the mission essentially forced her to sign a confession confirming it.

Of course, it’s possible that she did have sex with Willson; but there was never any kind of evidence other than Willson’s “confession,” which was clearly made in response to her breaking off the engagement, as an attempt to coerce her into going through with it.

True or not, though, the result was swift and predictable. No one was going to allow a suspected “fornicatress” to be their kids’ schoolteacher. Margaret’s career was over. Firmly declining Willson’s offer to “make an honest woman of her,” she left the mission.

There wasn’t a lot that she could do in the old Oregon Territory as an unattached woman of questionable reputation, other than settle for marriage with one of the gentlemen of questionable reputation with whom the area abounded. In that “confession,” Willson really had ruined Margaret’s life. An attractive, young, intelligent woman, she should have had the pick of the field; but the only men who would consider marrying her were the ones with problems of their own.

Unfortunately, even of this sorry lot, she picked a phenomenal loser: Dr. William J. Bailey of French Prairie.

BAILEY WAS A MEDICAL doctor in an age when medical doctors were the lowest kind of professional man. But his profession apparently furnished him with enough money to buy all the alcohol he could drink. Within three weeks of their nuptials, Dr. Bailey got drunk and tried to strangle her. She walked out, but then, in a pattern that would repeat itself many times over their stormy relationship, agreed to take him back if he would promise to stay out of the saloon. That lasted just long enough for him to get thirsty again, whereupon she walked out again, leaving a really remarkable note for him:

“I therefore leave you, resolved to live with you alone no more till I shall be satisfied that you are a reformed man. Besides the above, I am aware that you are nearly every day [word omitted from original, probably referencing a sex act] Indian women. And, after all this, to fear the horrid abuses and curses of such a profligate man as yourself, and at the same time perform every drudgery for him, I am certain that neither man nor God requires it of me. Signed, Your Suffering Wife.”

It didn’t last. They were soon back together, and fighting became a way of life.

During this time, though, the couple appeared to be doing very well indeed. Contemporary accounts report she kept their home immaculately clean, and played the role of the gregarious and mostly-respectable housewife very well. And in 1846, when the Oregon Spectator — the first newspaper ever printed in the state — got its start, she had a poem published in its very first issue, and for the next several months had charge of its “Women’s page.”

Unfortunately, she feuded with the Spectator’s editor, C.L. Goodrich, and the matter came to a head when Goodrich published a particularly nasty parody of one of her poems that he may actually have written himself. This little feud would simmer between them for years, and would cause a good deal of bother for Margaret when her book was published.

Meanwhile, things in the Bailey home were steadily getting worse. She stayed in the relationship and endured it as best she could for 15 years; but finally she secured a divorce and moved on.

Or, rather, she tried to move on. Of course, this all went down at just about the time when the notoriety of Willson’s “confession” had died down. Now, in addition to that, Margaret was, as a matter of record, a divorcée, and this was almost as scandalous to 1850s Oregonians as being accused of fornication. Attempts to get back into teaching school were fruitless; mothers came and pulled their children out of her class after hearing the reports. Her divorce from Bailey had left her with some cash, along with her piano; but not enough to live on long-term.

It surely also rankled Margaret to look at the progress William Willson, her fornication-accuser, had made in society. He’d married the “Other Woman” (the one he’d written to) and had what appeared to be a happy family with her, with three kids; he’d platted and founded the city of Salem; and he was revered as one of the officers of the provisional government formed at Champoeg in 1843.

So Margaret decided she’d take the lemons life had handed her, and make a pitcher of lemonade. In lieu of sugar, she’d sweeten it with some nice strong vitriol, and set about feeding it to her enemies.

The result would be a pseudonymous exposée of all the evils that had been perpetrated on her, and an account of how a good, pious girl like young Margaret could, through no fault of her own, end up as the Jezebel of the Oregon Territory. It would reveal the nasty, dishonest secrets that some of Oregon’s most revered “founding fathers” were hiding. And it would be very popular. People would read it with the same sort of furtive, wide-eyed fascination with which their great-great-great-granddaughters would peruse Fifty Shades of Grey.

We’ll explore that fascinating, wonderful, awful book — the first book published as fiction in the Oregon Territory, the foundation of our state’s literary tradition — in next week’s column.

(Sources: “First True Confession Story Pictures Oregon ‘Moral’” (sic), an article by Herbert R. Nelson published in the June 1944 issue of Oregon Historical Quarterly; The Grains; or, Passages in the Life of Ruth Rover..., a book by Margaret Jewett Bailey, in an edition edited by Evelyn Leasher and Robert J. Frank, published in 1986 by OSU Press; “Give Margaret Bailey her #Metoo Moment,” an article published Feb. 10, 2018, on the Salem Breakfast on Bikes blog, breakfastonbikes.blogspot.com)

Horse racing is a sport that’s largely faded from the scene in Oregon. There’s still an active community, and plenty of money changes hands at…