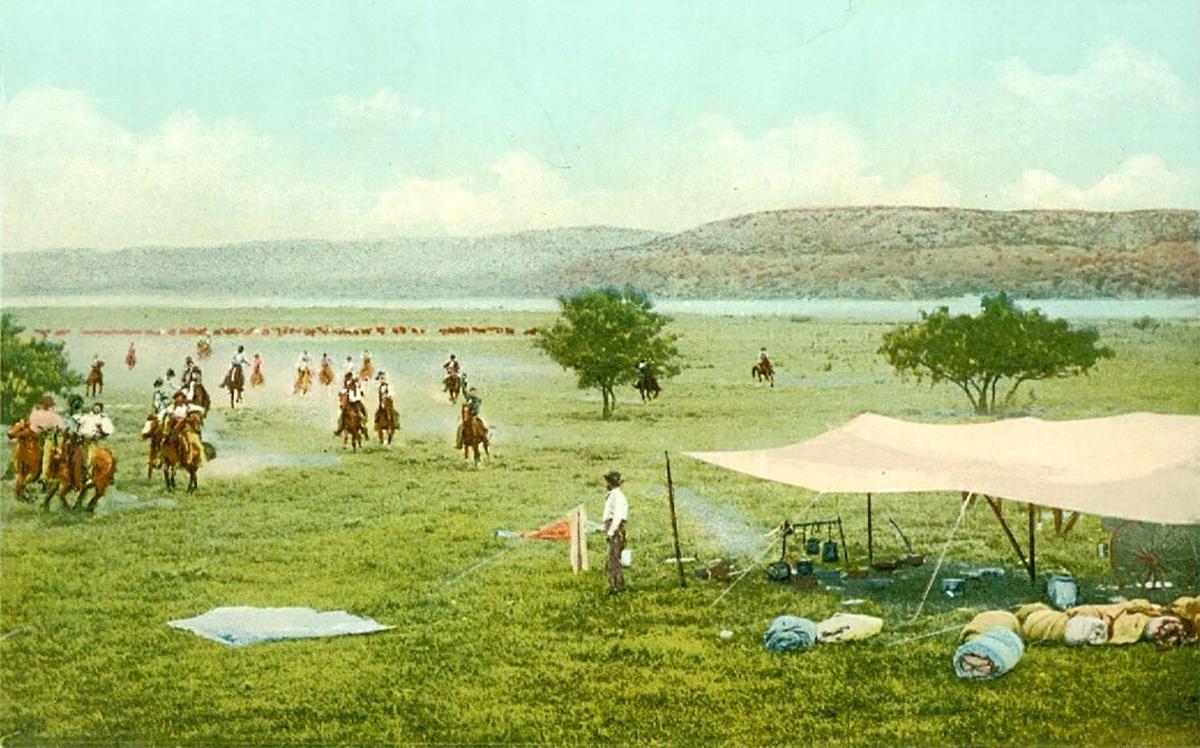 This 1906 image, titled “Cowboys Racing to Dinner,” illustrates what horse racing looked like for a lot of turn-of-the-century Oregonians. 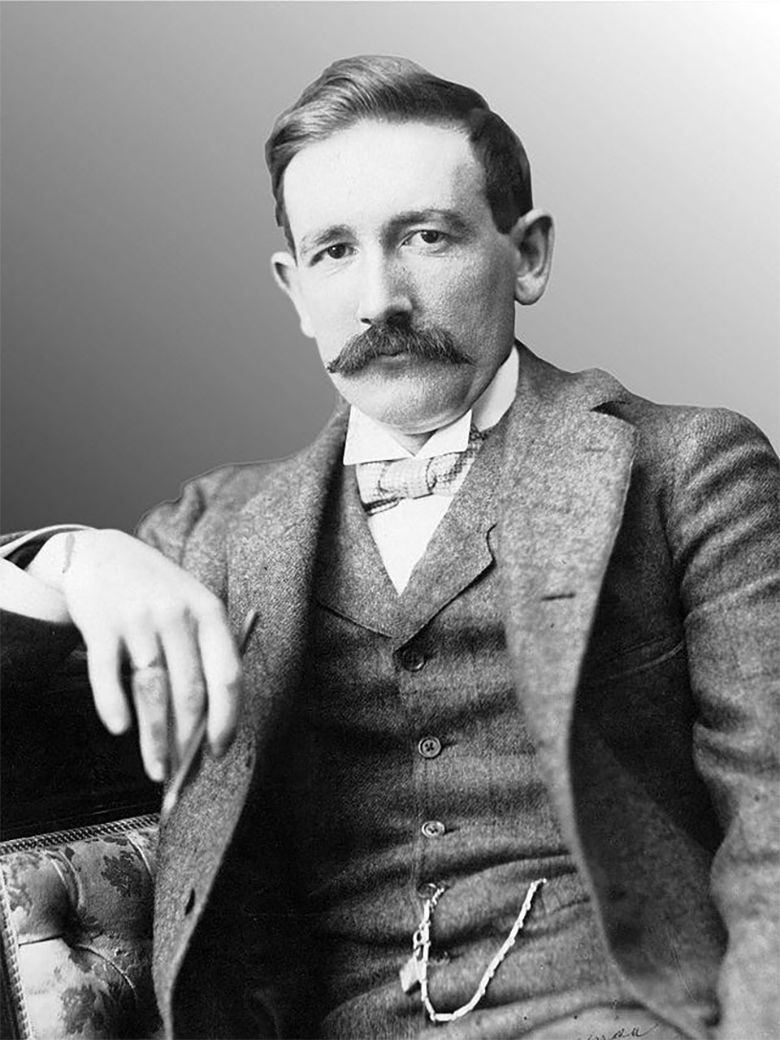 Homer C. Davenport as he appeared early in his career, circa 1900.

This 1906 image, titled “Cowboys Racing to Dinner,” illustrates what horse racing looked like for a lot of turn-of-the-century Oregonians.

Homer C. Davenport as he appeared early in his career, circa 1900.

Horse racing is a sport that’s largely faded from the scene in Oregon. There’s still an active community, and plenty of money changes hands at racetracks — but it’s more or less a niche thing.

That was emphatically not the case 100 years ago.

Back around the turn of the 20th century, horses were a big part of almost every American’s everyday life, and racing them against one another was a sport that practically everyone knew something about. Horse races were an important part of most county fairs and community events. And, of course, where there’s a horse race, there’s always a bookie ... and where there’s a bookie, there’s usually a story.

THERE’S NOT A WHOLE LOT going on these days in the Eastern Oregon community of Jordan Valley (pop. 181). But 100 years ago, this tiny, remote hamlet was home to a racetrack that may have been the fastest in the Northwest.

The track was laid out in a broad, open field in which, if one dug down a few feet, one would hit water. Basically, it was an underground swamp; but the turf over the top of it was thick enough to keep things dry (and, of course, always green).

The result was a spring-like effect when a horse ran on it. Jordan Valley’s was a “live track” — and from the 1870s when it was first laid out until the 1930s when it faded away, the place was famous in horse-racing circles.

At the Jordan Valley track, races weren’t held on a strict schedule; a lot depended on the weather. But most of the races happened in the spring and the fall.

When the time was right and the weather was good, the track would open for ten days of racing, and people would flock to Jordan Valley from all over Eastern Oregon. Business owners from other towns and mining camps would shut down their stores and travel to Jordan Valley; Indian bands would arrive and camp picturesquely on the outskirts of town. The Indians were known for bringing scruffy-looking, unpretentious ponies to the races and using them to clean up; the uninitiated bettors would barely give them a second glance before sinking heavy money on some grand-looking thoroughbred, only to watch that scraggly Cayuse pony eat its lunch.

The town of Jordan Valley, of course, rolled out the red carpet for all these out-of-town guests. Some members of the local business community rolled out the red lights, too — joined by the entire staffs of bordellos in Silver City and DeLamar, who closed up shop and moved into rented digs outside town or, if none were available, tents near the track.

“The city fathers wouldn’t allow any soliciting in town or at the track, but the girls found that Marshal Johnny Wroton couldn’t be every place at once,” historian Mike Hanley recalled in his book, Owyhee Trails.

According to Hanley, Wroton once ran a well-known local hooker named Lola out of the stands for “advertising” to the thunder of boos and cheers from the stands — they were booing him and cheering Lola.

But the girls soon figured out a work-around. They found and rented a small house whose back door was in full view of the grandstand. Because it was off the track property and outside city limits, there was nothing Wroton could do when they started staging promotional shows on the back porch; and, as a side benefit, the girls got to watch the races for free.

IN AUGUST OF 1909, at the track, the two fastest horses at the show were named Bunch Grass and Liberty. Bunch Grass’s owners challenged Liberty’s owner, Frank Swisher, to a race to decide who was the top pony; the challenge was promptly accepted; and, of course, everyone plopped down stacks of cash on their favorite.

And by “everyone,” I do mean “everyone” — including the jockey riding Liberty, who bet his wad on Bunch Grass. Frank Swisher, who had $100 riding on the race, watched in dismay as the jockey pulled the horse up, throwing the race to Bunch Grass. He was subtle about it, and no one but Swisher apparently noticed; but Swisher knew his horse, and he knew what the jockey had done.

But he paid his bet and kept his mouth shut — until that evening, when Bunch Grass’s owners had gotten several drinks into their victory celebration. Then he made a suggestion: How would they feel, he asked, about a rematch? He had $500 that still thought Liberty was the faster horse, he told them. Maybe they’d like to take it off his hands?

They most certainly would. But this time, Swisher was more careful in selecting a jockey — and Liberty finished several lengths ahead.

ANOTHER CASE OF HORSE-RACE FIXING led directly to the launching of the career of one of Oregon’s most famous native sons in the Gilded Age: none other than cartoonist Homer Davenport of Silverton.

Homer’s family attended the Oregon State Fair every year, and Homer was particularly interested in the horses. His ambition, in his youth, was to be a professional jockey; and he spent much of his boyhood hanging around the neighbors’ stables, where the neighbor, “Granger” Jones, let him exercise the stock.

At the state fair one particular year when Homer was in his early teens, one of Granger’s sons, Samp, set up a horse race. At that time, there weren’t enough good horses at the fair, nor enough interested bettors, to run a proper racing operation; so Samp set it up as a “boat race,” putting the family’s best horse in and matching it up with a collection of other ponies that were carefully selected to be sure and lose to it.

One of the horses they picked for their “sure losers” cohort was a mare that, although she had once been a really hot racer, was now too old to be a contender; they kept her around the stable to school colts. She still looked like a winner, though, so they put her in the race — and gave her to young Homer Davenport to ride.

“Innocent of the frame, he, of course, believed he was being sent out to win,” recalls former Oregon governor Oswald West, “And Samp, never giving the possibility of his winning a second thought, gave him the same instructions as he did the other boy (the one riding the picked winner) — ‘Get out there and win!’”

Acutely aware that this was his big break, and determined to make it count, young Homer urged his mount on — and he and the horse probably knew each other, so they had that teamwork thing going for them. They got off to a bad start, and were at the very back of the pack leaving the gate; but that soon changed. Homer’s horse surged ahead, passing the competition until she was neck and neck with the lead horse, and looked like she was actually going to take the lead.

Granger and his family were dumbfounded — and terrified. They had, of course, bet heavily on their picked horse. If Homer won, they’d be busted down to bedrock.

And Homer would have won, had it not been for the bad start he got. As it was, when he crossed the finish line, he’d taken second place by a head. Dejected, with tears streaming down his face, young Homer dismounted for the weigh-in. He’d been given his big chance, and he’d failed.

But he found the Jones family in great spirits, and very much disposed to forgive him for blowing it.

“Samp, with his picket full of pool tickets on the winner, put his arm around the boy and said, ‘Never mind, Homer, you know the best of jockeys have hard luck at times.’”

That autumn, possibly partly to make up for setting poor Homer up for this disappointment, the Joneses took Homer with them on a trip to San Francisco. There, he met “Lucky” Baldwin, a well-connected horseman who regularly ran stock on the Bay District track. Baldwin showed the Jones party a gorgeous three-year-old horse, the pride of the stables, and happened to remark that he’d not been able to find an artist to draw him properly. Homer promptly asked permission to try it himself; and Baldwin was so impressed with the resulting drawing that he pulled some strings and got Homer his first job as a cartoonist, at the San Francisco Chronicle.

(Sources: Owyhee Trails, a book by Mike Hanley (with Ellis Lucia) published in 1973 by Caxton Printers of Caldwell, Idaho; The Annotated “Cartoons by Homer C. Davenport,” a book by Gus Frederick published in 2012 by Liberal University Press; “Reminiscences and Anecdotes of Oregon History,” an article by Oswald West published in the September 1949 issue of Oregon Historical Quarterly)

In the world of literary works, there is a definite hierarchy. It’s occupied at the high end by the kind of subtle and masterful works that ge…