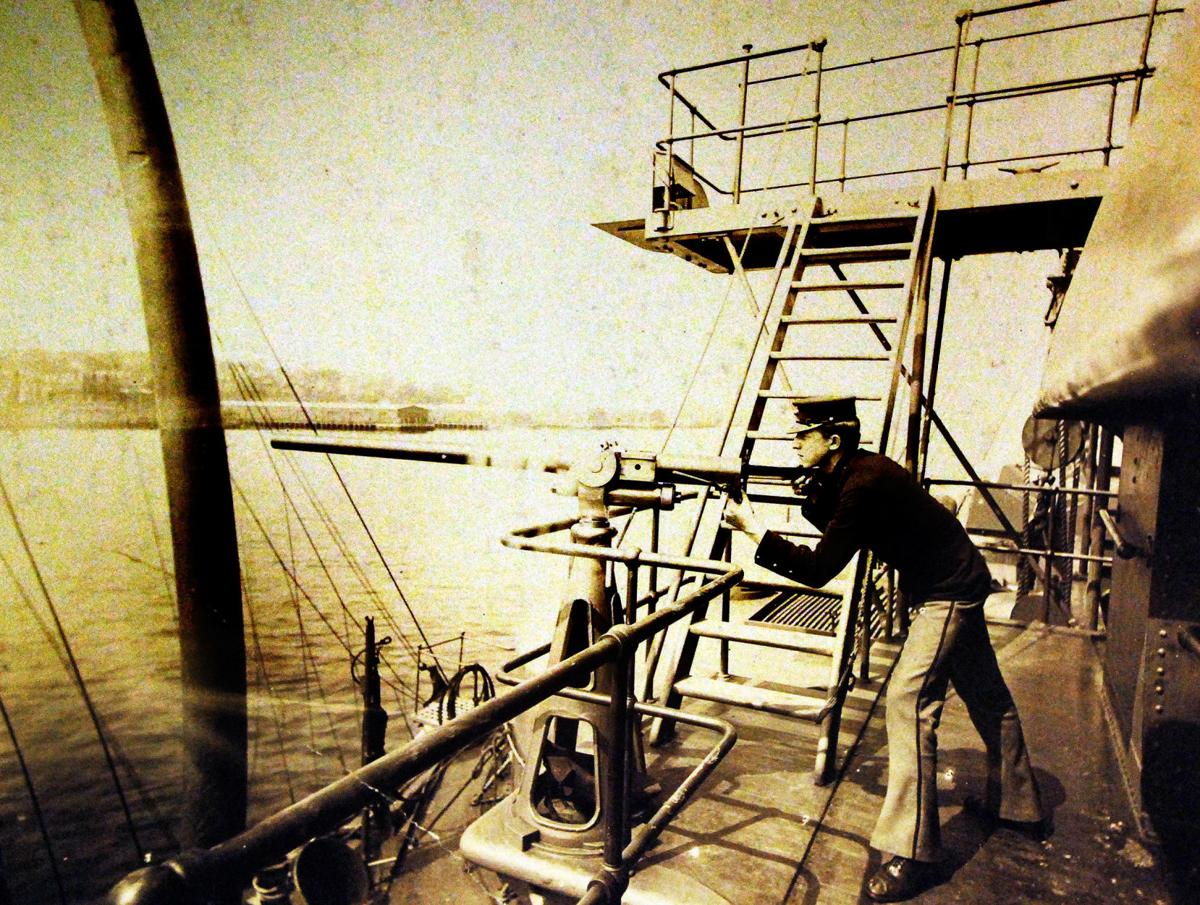 A crew member on the U.S.S. Oregon poses with one of the ship’s small one-pounder cannons. 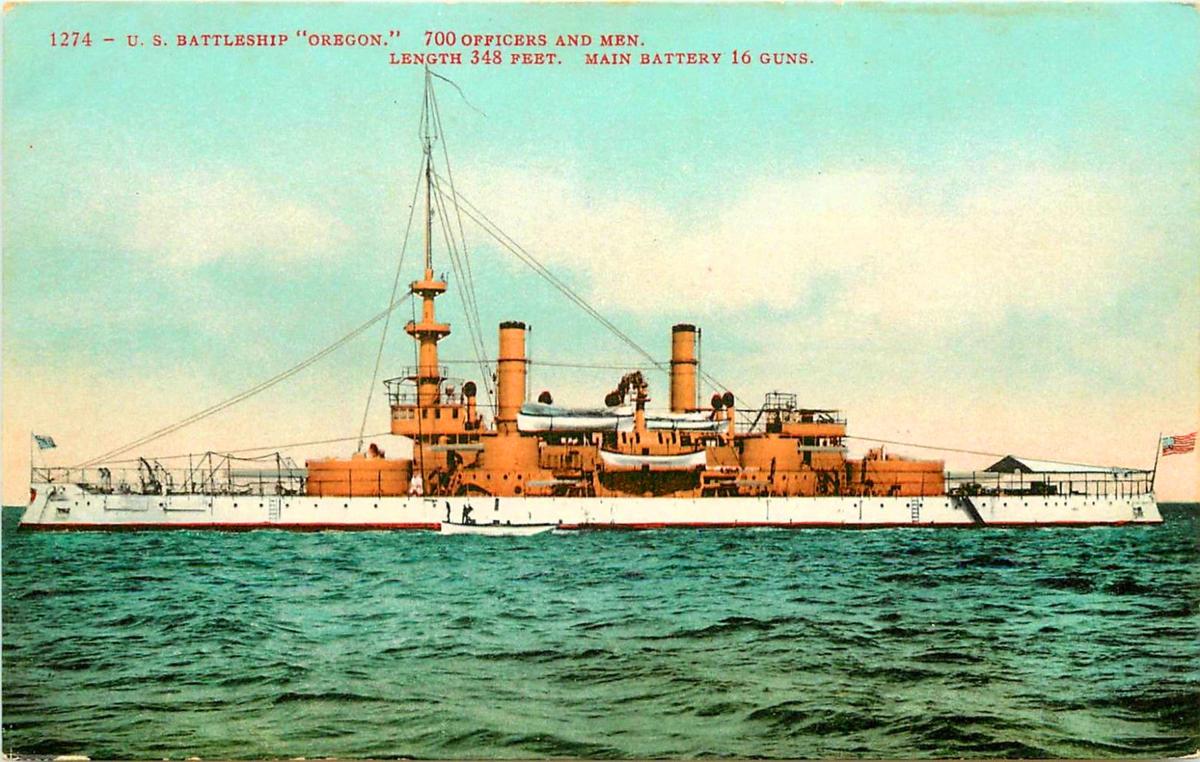 The U.S.S. Oregon in her heyday, proudly showcased on a early-1900s hand-tinted postcard. 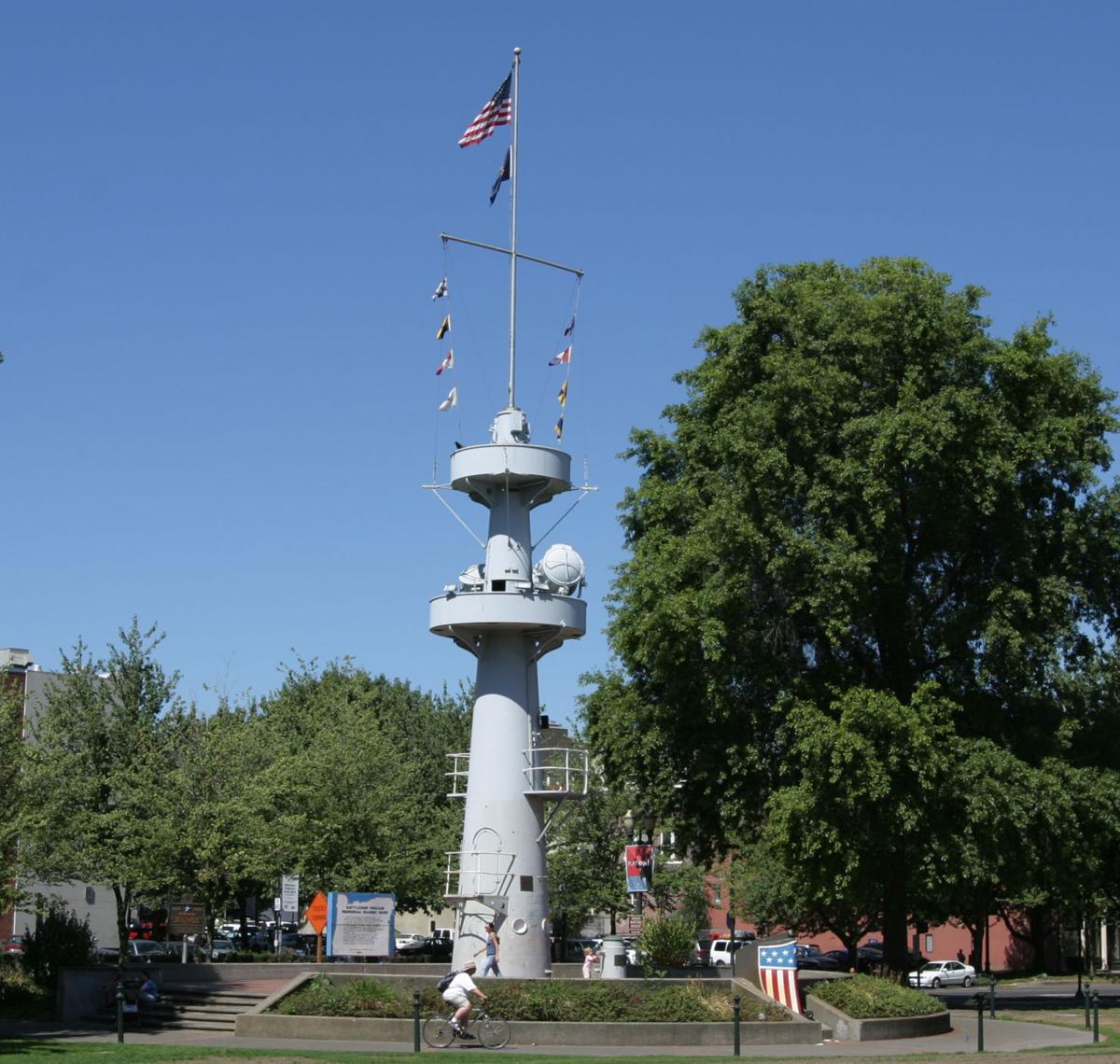 The mast of the battleship U.S.S. Oregon towers over Tom McCall Waterfront Park in downtown Portland. The bow shield from the old ship is in the foreground, to the right of the mast. 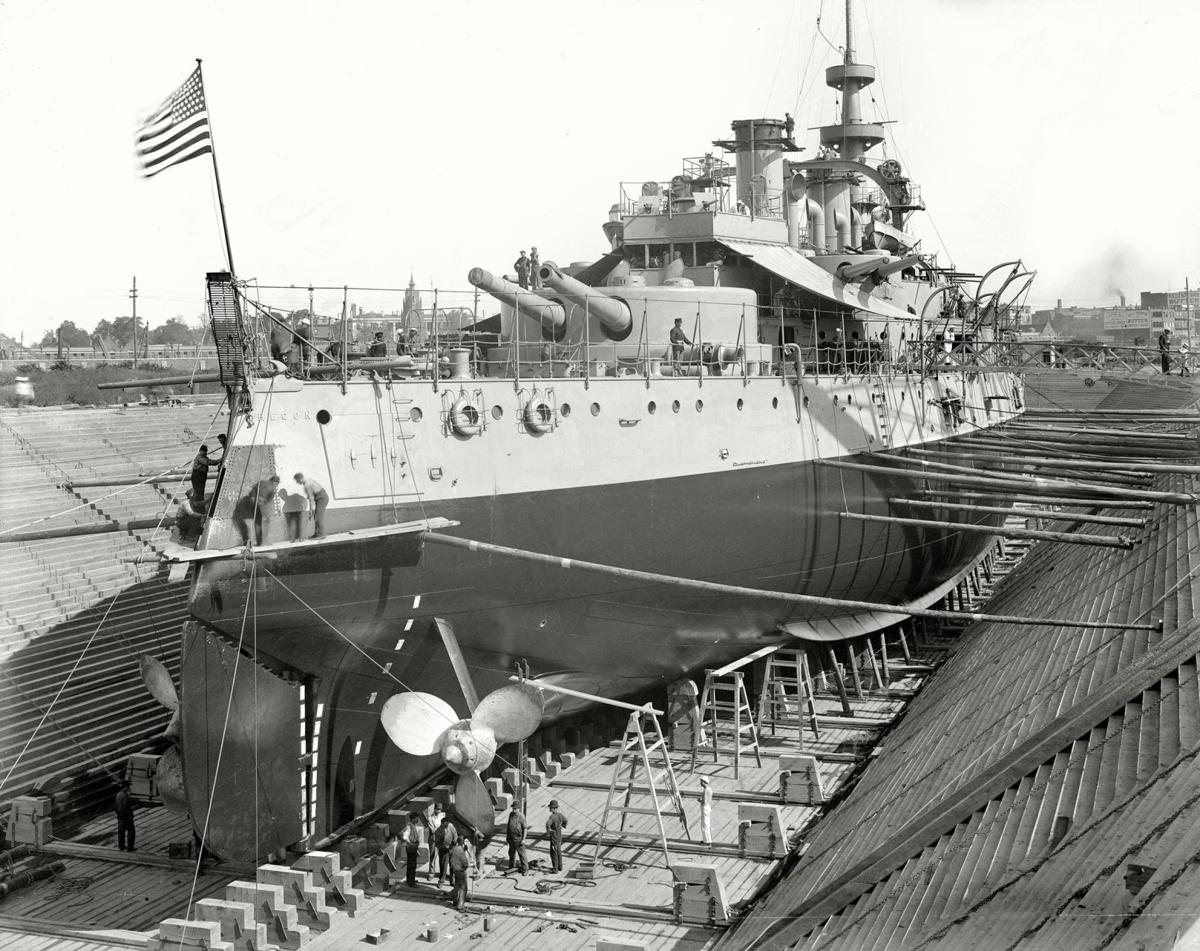 The U.S.S. Oregon in dry dock in 1898, two years after launch. When this photo was taken, the Oregon was the most famous warship in the country, and one of the most powerful. 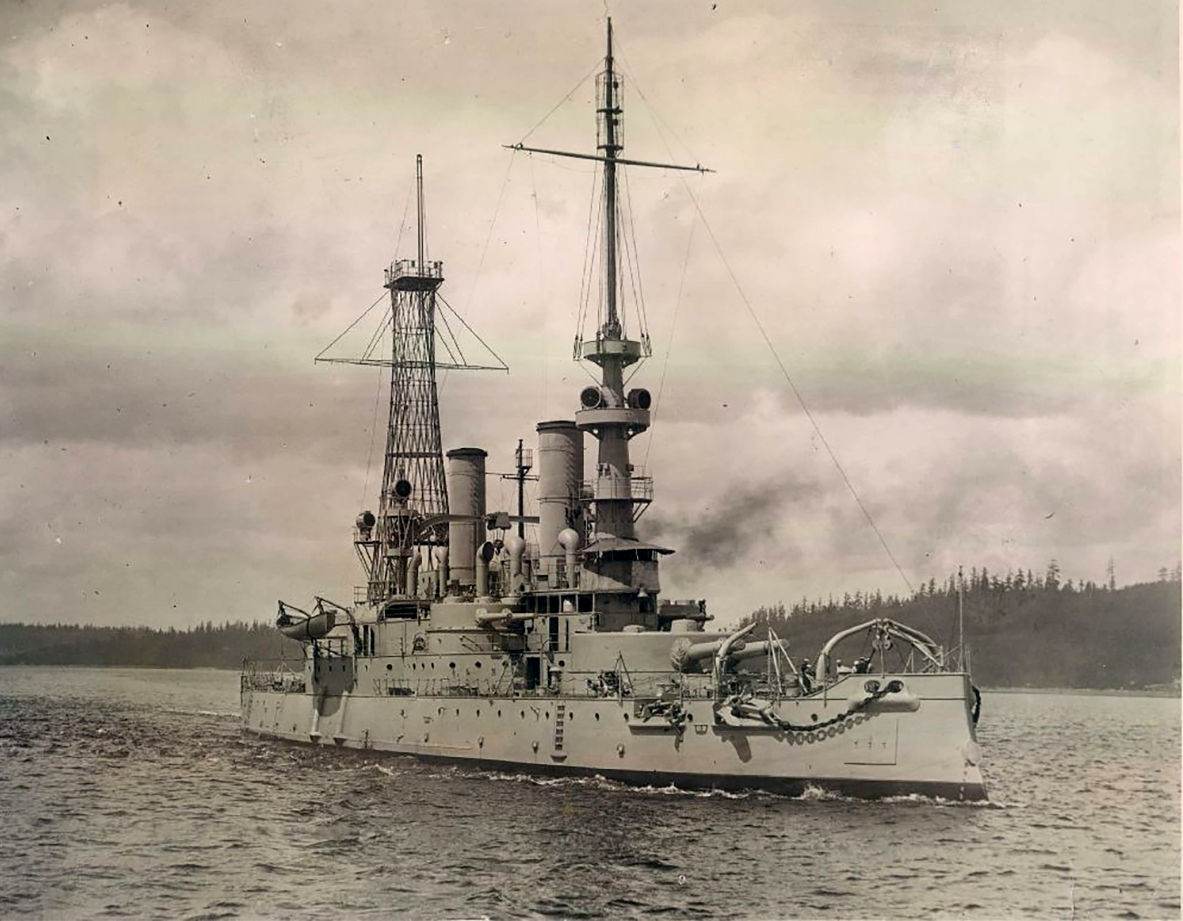 The U.S.S. Oregon under way on the Willamette River in Portland in the 1940s, during the time she was a museum ship.

A crew member on the U.S.S. Oregon poses with one of the ship’s small one-pounder cannons.

The U.S.S. Oregon in her heyday, proudly showcased on a early-1900s hand-tinted postcard.

The mast of the battleship U.S.S. Oregon towers over Tom McCall Waterfront Park in downtown Portland. The bow shield from the old ship is in the foreground, to the right of the mast.

The U.S.S. Oregon in dry dock in 1898, two years after launch. When this photo was taken, the Oregon was the most famous warship in the country, and one of the most powerful.

The U.S.S. Oregon under way on the Willamette River in Portland in the 1940s, during the time she was a museum ship.

December 7, 1941, was a bad day for American battleships.

Four of the U.S. Navy’s front-line battleships — the Arizona, Oklahoma, West Virginia and California — were sunk or destroyed. Four more were beached or badly damaged.

And far across the ocean, the fate of another storied battleship was sealed as well: The U.S.S. Oregon, hero of the Spanish-American War, which was then resting quietly at a dock in Portland as a museum ship.

TIME NEVER WAS on the U.S.S. Oregon’s side. She was launched in 1896, in the middle of a remarkable period of torrid innovation and development in the history of warships, a time when ship designs were only good for about ten years before something better came along.

The Oregon was one of three sister ships built at the same time, two on the East Coast and one (the Oregon) in San Francisco. They were built to the same specs, but for some reason the Oregon was the fastest of the group by a considerable margin. That speed would become the ship’s main claim to fame.

By the time the Spanish-American War was on the verge of breaking out, in 1898, the Oregon already had a reputation. It was known as “the bulldog of the Navy,” a reference to its massive bow wave when under full steam; the wave was big enough that sailors joked that it looked like the ship had a bone in its teeth.

The onset of hostilities caught the Oregon on the wrong side of the continent, up in Bremerton. Orders went out for it to get “around the horn” and up to the Caribbean Sea right away.

Heaping the decks with coal to save time on fuel stops, the battleship’s crew set out on a cannonball run. They tore southward to Patagonia, cut through the notoriously stormy Strait of Magellan, got caught in a bad one, rode it out successfully, and then raced northward past Argentina and Brazil to rendezvous with the American fleet off the Florida coast — arriving on May 24, 1898.

It had taken the new battleship 68 days, and she’d come almost 17,000 miles (from Bremerton to Key West). The run broke several records for speed and endurance. Along the way, she’d demonstrated to the many doubters that a modern, low-freeboard front-line battleship could handle very heavy seas indeed. She had also inspired a new wave of support for the Panama Canal project.

The crew wasted no time joining up with the rest of the fleet.

“Two days later, the new battleship, her decks still piled with coal and the crew covered with the grimy dust, fell in with the immaculate ships of the American fleet for inspection,” historian Leonard Wiley writes. “She was a dirty, disreputable-looking bulldog, ready for trouble.”

And a little more than a month later came the naval engagement that would really cement the Oregon’s fame. The Spanish fleet, which had been secure in the harbor at Santiago, Cuba, was forced to make a run for it after a U.S. expeditionary force landed and started pushing toward the harbor. On July 3, 1898, the Spanish fleet made a break for freedom.

The American fleet was ready — or, rather, ready-ish; there was some scrambling for position, but they were soon formed up and in hot pursuit. The volume of fire was overwhelming; but had the Oregon been the only ship on the scene, the outcome likely would have been the same. Spain’s navy was stocked with small ships, most of them slow and obsolete; and the Oregon’s 13-inch main cannons, firing 1,100-pound shells, could outrange everything they had.

One by one the Spanish ships were hit, caught fire, and were beached. Two ships, the Vizcaya and the Cristóbal Colón, managed to outdistance all the American ships … except the Oregon, which chased them down doing an astonishing 18 knots — crews panting and sweating as they shoveled coal into the furnace, boiler nearly bursting — and then, from five miles astern, started dropping those brutal 13-inch shells around their ears. The Vizcaya was hit, and beached; the Cristóbal Colón was nearly hit, and struck her colors. The battle was won, and with it the war — and basically, one ship had done all of it.

But by 1903 or so, she was already a little obsolete. And in early 1906 — the same year the British rolled out the legendary 527-foot H.M.S. Dreadnought, revolutionizing battleship design for everyone — the die was cast. The aging warrior was sent back to dry dock to be “modernized,” and when she emerged, she was put on reserve duty.

The Oregon was on backup and ceremonial duties during the First World War; the highlight of it was probably in 1919 when, just before being decommissioned, she served as reviewing ship for Woodrow Wilson in Seattle.

But brief though it had been, the aging warrior’s moment in the sun had been so bright that a movement got started in Portland to preserve the ship as a floating monument and museum. And, the Navy not having any other plans for her, this was done: the ship was restored and handed over to the state of Oregon on an indefinite loan.

And there she sat, moored in Portland Harbor, playing host to groups of schoolchildren and visiting history buffs and Spanish-American War vets, becoming a familiar and beloved feature of the Portland skyline.

Then came the events of Dec. 7, 1941, which changed her destiny and sealed her fate.

THE U.S., ONCE at war, started spinning up its manufacturing base. Appeals went out for scrap metal to be donated to the war effort. And, of course, the old U.S.S. Oregon represented a very large potential contribution to any scrap-metal drive.

It wasn’t an easy call to make. President Franklin Roosevelt himself considered the Oregon the fourth most historic Navy vessel afloat, behind the Constitution, the Constellation, and the Hartford.

But war is war. And in early 1942, the darkest hour of the war for the U.S., the very survival of the nation seemed at stake. Sacrifices would have to be made.

So the governor of Oregon gave the ship back, and she was sold for $35,000 to an outfit in Kalama to be stripped.

The ship’s hull was towed to Guam and finished World War II as a munitions barge. Finally, in 1956, what remained of the old battleship was sold to a Japanese company and cut up for scrap.

Today, all that remains of the U.S.S. Oregon is the old ship’s mast and bow shield, which are part of a memorial in Portland’s Tom McCall Waterfront Park.

(Sources: “Battleship Oregon’s 50 Years,” an article by Leonard Wiley published in the March 1943 issue of Oregon Historical Quarterly; “U.S.S. Oregon,” an article by Thomas McClellan published on March 17, 2018, at oregonenecyclopedia.org)

One of the most enduring and appealing tropes in popular fiction is the “Femme Fatale,” like Brigid O’Shaughnessy in Dashiell Hammett’s The Ma…