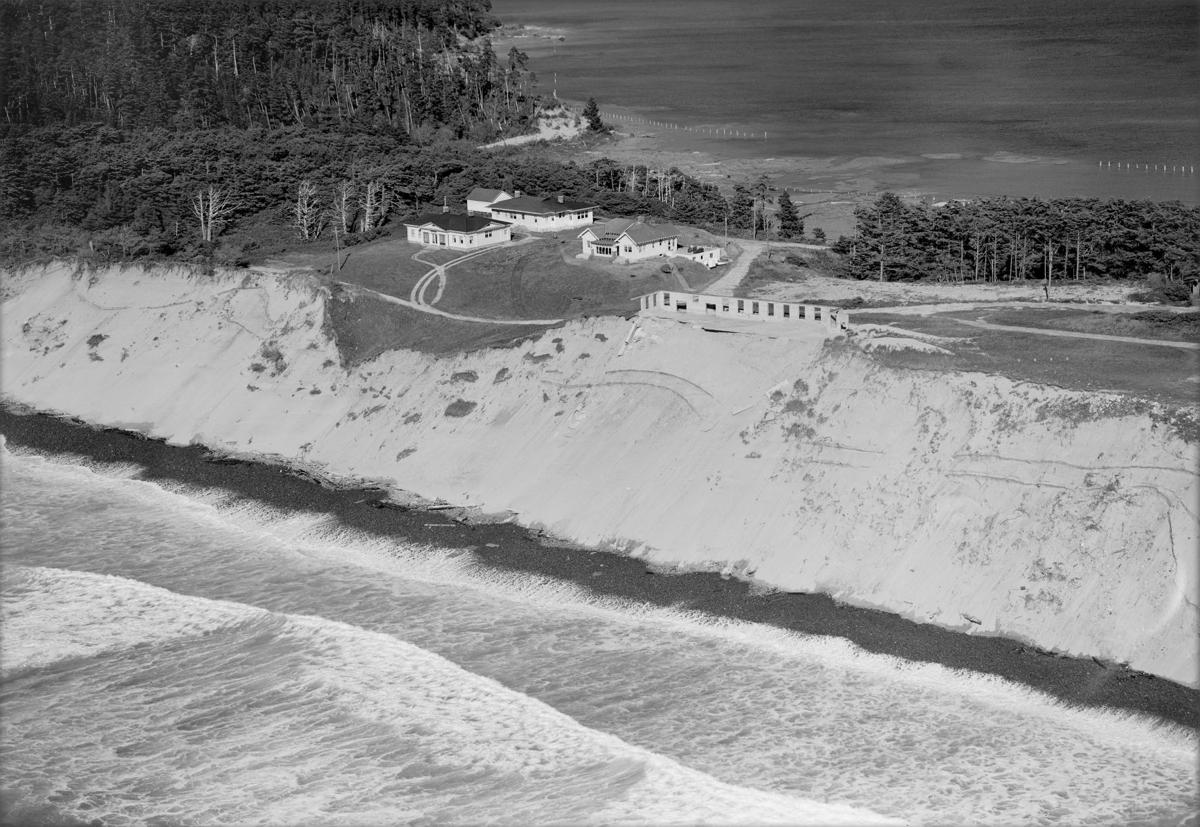 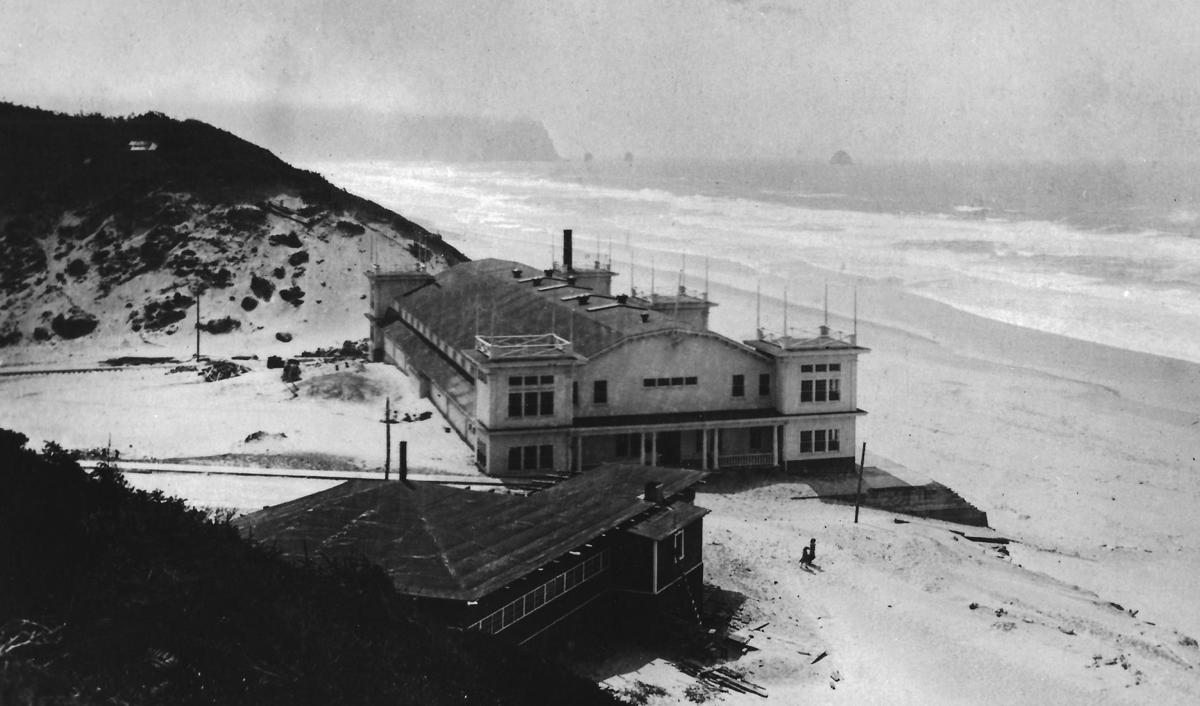 The grand natatorium and open-air dance pavilion on the beach at Bayocean. Photo courtesy of Lorraine Eckhardt. 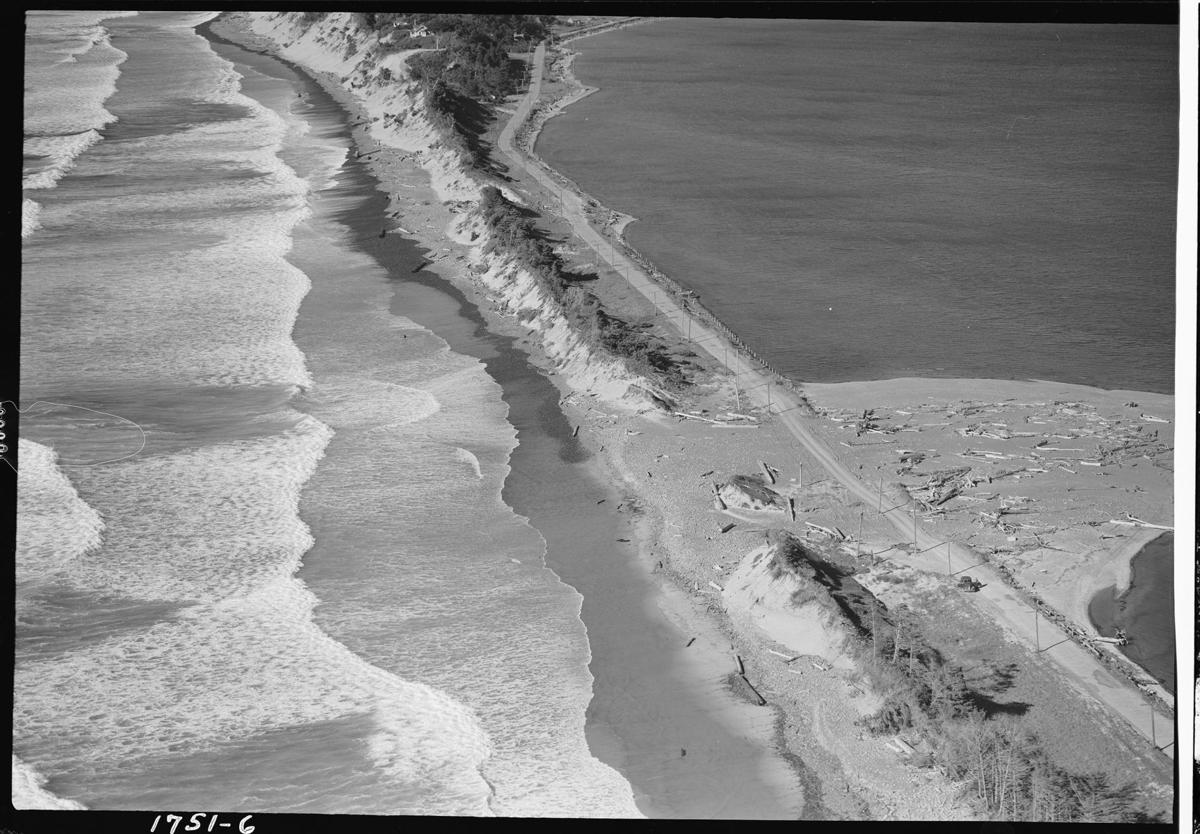 One of the gaps that formed on Bayocean Spit, 1949. Photo courtesy of Thomas Robinson, Historic Photo Archive.

On an upcoming episode of Oregon Public Broadcasting’s (OPB) “Oregon Field Guide” learn more about “The Lost City of Bayocean.” The 30-minute program offers a historical look at the once-thriving coastal town in Tillamook County, uncovering the mystery behind its rise and fall. It tells the story of a pioneering vision and dreams lost to a man-made environmental catas-trophe.

The narrow spit of land that separates Tillamook Bay from the Pacific Ocean was once home to a thriving resort known as "The Atlantic City of the West." Founded in 1907, Bayocean Park boasted a natatorium (complete with heated seawater and a wave generator), a dance pavil-ion, a hotel and elaborate plans for many other amenities.

By 1914, commercial interests in the region needed a jetty to tame the treacherous Tillamook bar. The Army Corps of Engineers proposed a dual jetty system. But local communities couldn't raise enough money to fulfill the plan and opted for a single jetty on the north side, which was completed in 1917. That miscalculation unleashed the powerful forces of the mighty Pacific that began carving away Bayocean's shoreline.

By the end of the 1920s, Bayocean's buildings were beginning to tumble off palisades into the ocean. In 1952, the narrow spit was completely breached and what remained was a shrinking island with just a handful of stalwart inhabitants.

Perhaps the most famous resident was Francis Drake Mitchell. in 1908, Mitchell and his wife Ida were among the first investors in the resort. By the 1940s, the then-elderly couple could be seen with shovels and a wooden wheelbarrow trying to build bulkheads against the ocean's relentless advance. The Mitchells lost everything when Ida died in 1953, and Francis Drake was committed to the State Hospital in Salem for the rest of his days.

Today, the area is a well-kept secret recreation area administered by Tillamook County. This new episode of “Oregon Field Guide” explores the once-thriving resort at Bayocean and how it is a cautionary tale of a man-made environmental disaster.

“The Lost City of Bayocean” airs Thursday, January 16 at 8:30 p.m. on OPB TV. You can also watch it online the following day at https://watch.opb.org/show/oregon-field-guide/.

Letter: Sometimes a mask is just a mask